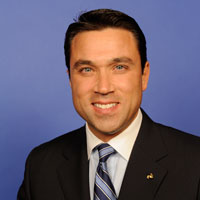 Representative Michael G. Grimm, a second-term congressman from Staten Island, was indicted Monday on federal fraud charges for underreporting the wages and payroll while running an Upper East Side restaurant, concealing the actual payroll in a separate set of computer records.

The charges, unsealed Monday, detail how Mr. Grimm concealed more than $1 million in gross receipts for the restaurant, and hundreds of thousands of dollars in employee wages, thus getting around federal and New York State law. He also lied under oath in January 2013, while he was a member of Congress, during a deposition, the indictment says.

The indictment charges Mr. Grimm with, among other things, perjury, wire fraud, mail fraud, obstruction of justice, employment of illegal immigrants, obstructing and impeding tax laws, and conspiracy to defraud the United States.

[…] The concealment, perjury and obstruction of justice charges come in connection with a January 2013 deposition given by Mr. Grimm as part of a lawsuit by two former Healthalicious employees who alleged that Mr. Grimm was not paying them minimum wage or overtime.

Grimm is more than just a congressman, actually. He’s also a former US Marine and FBI agent. So “Semper Fidelus” and “Fidelity, Bravery, Integrity,” and all that. (Not sure what the motto of the restaurant industry is, but I doubt it emphasizes fidelity in any language.)

The point is,* if we build a minimum wage law that not only facilitates wage and tip theft, but incentivizes it, then some businesses owners will surely exploit it to cheat their workers.

* (Also, given the prevalence of accounting shenanigans, I don’t trust restaurateurs pleas of poverty. I just don’t.)