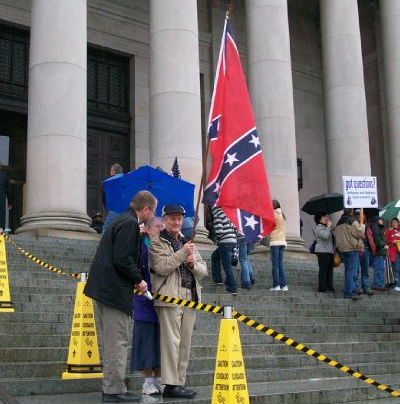 It’s not so surprising to see a Republican introduce far-right-wing legislation, but it is a little stunning to see the entire Republican caucus embrace the fringe constitutional theories of the Tenther movement, and with so little thought or hesitation.

As I’ve previously reported, two-thirds of the House Republican caucus has already signed on to bills sporting stock, Tentherist boilerplate, and on Wednesday they attempted a procedural motion to move two of these bills to the floor for a vote without hearings or debate:  HB 2669, which would have exempted Washington from national health care reform, and HB 2708, which would have declared null and void any federal greenhouse gas or fuel economy regulations. The motions failed on a party-line vote, with every single House Republican voting in favor.

That’s just plain crazy, but what’s crazier still is that far from being a mere symbolic gesture, or ill-conceived effort at political gamesmanship, Republican legislators are eager to defend these measures on fringe Tentherist grounds, as Republican Minority Whip Rep. Bill Hinkle (R-13) recently did in an interview with Publicola:

“Have you heard of the 10th Amendment?” Rep. Hinkle begins when asked to explain the bill. (Answer: Yes. That’d be state’s rights.) Hinkle, the Republican minority whip, says the health care bill is a federal power grab that violates the 10th Amendment “because it would be a national system, preventing states from having our own system … and this kind of stuff is driving people crazy. People in my district are furious.”

Hinkle says, “It’s time for the states to excercise the power to remind the federal government of constitutional restrictions on their power.”

Yeah, well, good point, except that Hinkle’s interpretation of the 10th Amendment flies in the face of 220 years of Supreme Court rulings. And Hinkle is not the only one. Back in November, Rep. Matt Shea (R-Greenacres) wrote a prominent post on the tentherist website, the Tenth Amendment Center, apparently outlining the WSRP’s 2010 legislative agenda, entitled “Resist DC: A Step-by-Step Plan for Freedom,” in which he makes the rather blunt assertion:

If imposed, socialized health care and cap and trade will crush our economy. These programs are both unconstitutional, creating government powers beyond those enumerated by the Constitution. If those programs are nullified, it will give the individual states a fighting chance to detach from a federal budget in freefall and save the economies of the individual states.

That not only represents a rather dubious interpretation of the Constitution, it also appears to be an every-state-for-itself call for dissolving the union. No wonder at least one of the teabaggers at yesterday’s sparsely attended rally waved a Confederate flag in support of Rep. Shea’s agenda.

Really, read Shea’s post, for regardless of how wacky and fringe you think his constitutional theory might be, it reveals a dangerous political strategy that argues for states to act in defiance of both federal law and the federal courts. When teabaggers like Shea and Hinkle argue for what they call the “nullification doctrine,” they essentially argue for the dissolution of the union as we know it, for the power of this doctrine comes not from legal theory, but from the simple belief that if enough states were to defy Congress and the President, Congress and the President would be powerless to do much about it.

This isn’t the doctrine of constitutional scholars. It is the doctrine of rebels. As House Speaker Pro Tem Jeff Morris (D-Mount Vernon) succinctly put it in a recent press release:

Rep. Morris’s snark would be funnier, if it weren’t apparently true.