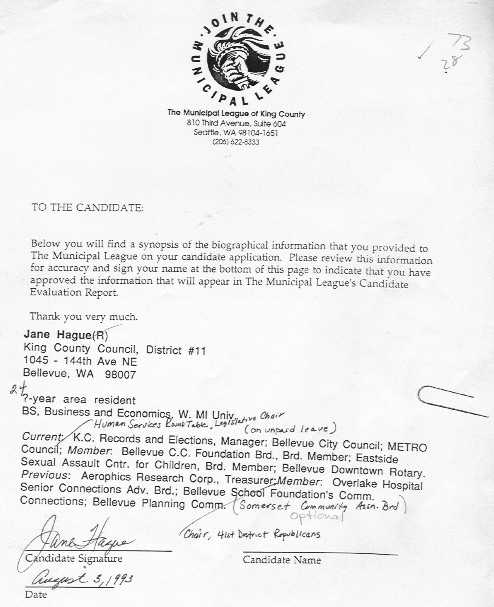 Last week Republican King County Councilmember Jane Hague blamed staff for repeated errors in which published questionnaires and profiles claimed a four-year college degree she had not earned. But even if Hague won’t admit the truth, the document above, uncovered in a front page story in today’s Seattle Times, pretty much speaks for itself. As the Times explains:

The Municipal League, which publishes annual candidate evaluations, sent a letter to Hague in 1993 asking her to proofread the biography she had submitted: “Please review this information for accuracy and sign your name at the bottom of this page to indicate that you have approved the information … ”

The document was amended in several places to indicate that Hague had lived in the area for 24 years, was an active volunteer, and was on unpaid leave from her job as King County’s elections manager while running for the County Council.

But no correction was made to the sentence that stated she had earned a bachelor’s degree.

Just look at Hague’s attention to detail in amending the document. Then look at the detail she left unchanged. Now reread what she told the Times last week about circumstances surrounding her failure to be awarded a degree:

“About 20 years ago,” when Hague contacted her alma mater in an attempt to document her credits and get a degree, she learned that credits from the law class hadn’t been transferred to Western Michigan and by then it was too late. She said she never tried to portray herself as a college graduate.

In the end, this is not about a little white lie from 15 years ago, it’s about a long pattern of prevarication and blaming others that continues today. It is about whether Hague deserves voters’ trust, regardless of who her opponent might be.