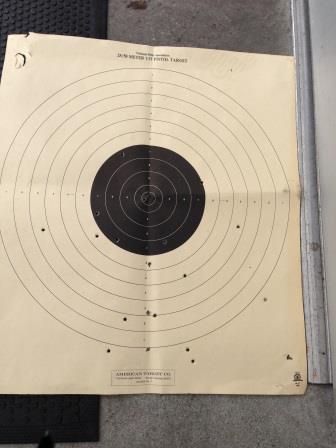 Hey, let’s not jump to conclusions—it could have been an angry Seattle Metropolitan Parks District supporter:

An anonymous individual (or individuals) left a target riddled with bullet holes on the doorstep of the Seattle-King County League Women Voters‘ Capitol Hill office over the recent holiday weekend—a message, the LWV believes, about the state chapter’s support for I-594, which would require background checks for gun sales online and at gun shows. A volunteer for the group found the target over the weekend.

… In a statement, Seattle/King County LWV president Ellen Barton said, “This apparent attempt to intimidate us will not dissuade us from our work. The League of Women Voters will continue to be a forum for dialogue, research and education on gun laws and gun violence, and we look forward to reasonable, robust dialogue in the months ahead.”

Couple of thoughts. First, if you want to persuade voters here that we don’t need mandatory background checks on all gun sales, threatening to shoot them isn’t the best way to do it.

Second, my God, what a crappy shot! I mean, look at that target—it’s all over the place! I shot better targets than that when I was 12 years old. If you’re gonna threaten a bunch of old ladies, the least you could do is use a target from somebody who actually knows how to shoot.

If anything, you’re just encouraging us to come for your guns, now that we know you couldn’t hit the side of a barn. Just sayin’.