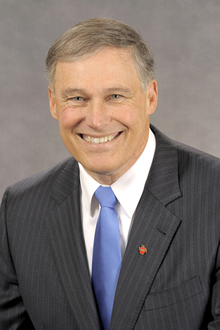 I guess this is the sort of navel gazing that passes for news these days around the offices of the Seattle Times editorial board:

With the retirement of state Supreme Court Justice Jim Johnson for health reasons, Gov. Jay Inslee will have the opportunity to appoint a justice to the nine-member panel. The Spokesman-Review and the Yakima Herald-Republic have joined The Seattle Times in encouraging the governor to look East of the Cascades for his choice.

As I’ve previously written, I don’t really care from what part of the state Justice Johnson’s replacement hails, as long as he or she is the best qualified jurist available. That should be Inslee’s primary concern. Though I’ve no problem with diversity—geographic or otherwise—being used as a tie-breaker.

That said, let’s be clear that Governor Inslee has absolutely nothing political to gain from appointing a justice from the other side of the mountains. Either way, he will not receive a single Eastern Washington daily newspaper editorial board endorsement in 2016, regardless of his Republican opponent. Nor would such an appointment earn him any additional Eastern Washington votes.

Elections have consequences. Had Republican Rob McKenna won the governor’s mansion, you can damn well believe that he would have treated Democratic constituencies like crap. So there’s no real reason to reward Eastern Washington voters with any special favors beyond the billions in tax subsidies we already ship their way.