Looks like the state GOP damage control efforts are kicking into high gear, feeding information to our good friend Stefan at (un)Sound Politics. Stefan complains that this is not a “fake” sex offender postcard at all, but actually represents a real live sex offender from Pierce County.

Oh. Well forgive me for not figuring that out. Stupid me (and Jon and Richard) were looking in Clark, Walla Walla, Kitsap, and King counties… you know… where the bulk of the postcards were actually mailed. You see, when we read the bold print at the top that said “This violent predator lives in your community” we just assumed the state GOP meant the community of the person receiving the postcard. Silly us. 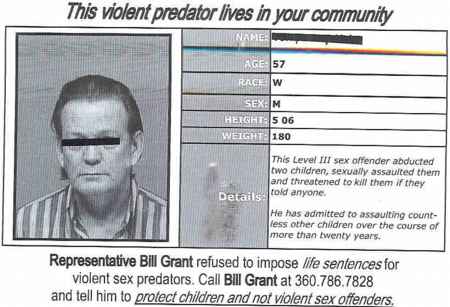 Of course, then Stefan tries to switch the discussion off his GOP overlords getting caught in a disgusting and irresponsible dirty trick, and move onto the Republican meme that Democrats are soft on crime:

I suspect that part of the reason that the Ds wanted lesser sentences for offenders who are known to their victims is not, as publicly stated, to ensure more convictions of creepy uncles, but to protect teachers who prey on their students.

You know what Stefan… fuck you. If you actually believe that Dems would protect teachers unions over sexually abused children then you are just plain sick. And if you don’t believe it, then your are as dishonest and conscienceless as the GOP operatives who designed and executed this disgusting fear campaign.