I particularly like the headline in the online edition, “Rich are feeling pinched too,” but the simple fact that this story makes the front page of the Seattle Times tells you all you need to know about the life experience and day to day perspective its publisher. 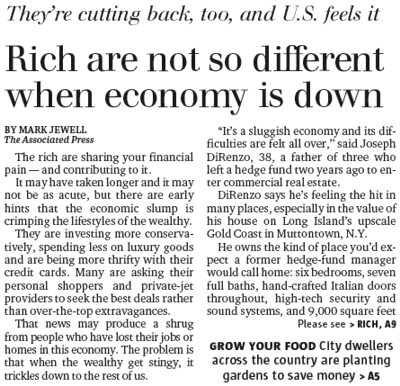 Oh no… the rich are “spending less on luxury goods and are being more thrifty with their credit cards!” In fact, I understand that things have gotten so tough for the ultra wealthy, that some are even being forced to sell off their extensive newspaper holdings in Maine! Can you feel their pain? (I suppose the Blethens might chafe at my description of them as “ultra wealthy,” but that just shows how out of touch they really are.)

And… that the Times editors thought this fabulously wealthy human interest story worthy of front page placement is even funnier in light of the tiny little teaser they squeezed into the bottom right hand corner:

Yeah sure, the working and middle class are farming their backyards so that they can afford to feed their families… but at least they’re not being forced to suffer the humiliation of shopping around for the best deal on private jets.  I suppose that explains the relative placement of the two stories.