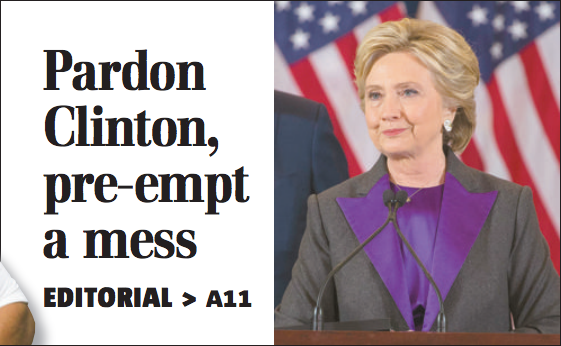 Jesus Christ, I just have to take a moment to remark on what is perhaps the stupidest fucking editorial ever from the Seattle Times, a newspaper that has turned stupid fucking editorials into a veritable art form:

PRESIDENT Obama should pre-emptively pardon Hillary Clinton to protect her and the United States from a vindictive, showboat prosecution by the incoming Trump administration.

No, NO, NO… President Obama should not pardon Hillary Clinton under any circumstance! A pardon would be understood by the vast majority of Americans both as an admission of guilt and as conclusive evidence of endemic corruption in the Democratic establishment! How fucking stupid can the Seattle Times be not to see the politics of the situation through to its logical conclusion?

While I understand and even agree with the editorial board’s impulses (“The danger to America is not Clinton’s freedom but in having a presidency that even threatens to use its power for vendettas and jailing opponents”), it is far too late for such democratic high-mindedness. The threat has already been made! And the American people (well, the Electoral College) rewarded Trump for it with the White House. Obama pardoning Clinton would only embolden and enrage the trumpenproletariate, while freeing Chancellor Trump from the responsibility of fulfilling one of his most disturbing campaign promises.

Rather, cold political calculus tells us that we must let Trump be Trump. We must not allow him to escape this defining moment. He must either demonstrate to his base the weakness that is at the vile heart of all tyrants, or demonstrate to the world how little he honors the rule of law, let alone our nation’s two-and-a-quarter centuries of peaceful transfer of power.

A Clinton show trial would no doubt be a shock to the American psyche and a permanent scar on our nation’s world standing. But so would the show trials of Clinton underlings that would no doubt ensue should the Trump regime be denied its promised revenge (a Clinton pardon should be a sign for Huma Abedin to flee the country). It may be too late to avoid this trauma. But at least it would finally and totally rip away the fiction that there is anything normal about the alt-right regime that has seized the White House.

If Trump prosecutes Clinton, he turns her into a martyr of the democratic resistance. But if President Obama pardons Clinton, he transforms the two of them into political villains against which the Republicans will effectively run for decades to come. It isn’t fair. It isn’t comforting. But that is the America in which we now all live.

It is also an America that newspapers like the Seattle Times helped create through their endless coverage of the trumped up email witch hunt, and a shameful campaign of false equivalency that now trivializes “go hang yourself” and “go back to India” as mere “complaints” while characterizing Breitbart’s obvious and indisputable white nationalism as a mere he-said/she-said allegation of “critics say“—the critics explicitly othered on the paper’s front page as “angry … Jewish and Muslim groups.”

Like most of the rest of media, the Trump-normalizing Seattle Times has surrendered the moral authority to even report the news, let alone comment upon it. It does not matter if the editorial board’s motives were good: their advice is more than just wrong, it is dangerous.

The sole purpose of a free press is to safeguard democracy. On this the Seattle Times and the rest of the old guard news media utterly failed. So please, Seattle Times, for the sake of our nation, shut the fuck up before you do more harm.