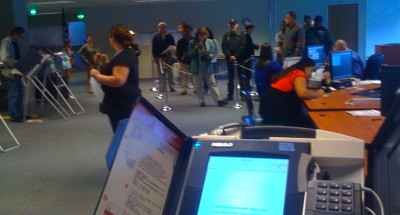 Just got back from casting my ballot, and that was the view from behind the voting machine at King County Elections’ accessible voting center in Tukwila, WA. There were about a dozen people waiting to use the machines at about 11 AM, with another dozen filling out paper ballots. And remember, this is in a county that conducts elections entirely by mail. (Well, obviously, almost entirely.)

Elections workers told me that I came at good time, as things had been much busier earlier in the morning, and they expected crowds to back up again during the lunch hours. Meanwhile, mail-in ballots continue to arrive at a near-record mid-term pace.

Another 170,000 ballots arrived this morning, bringing King County’s running total up to 580,000, or roughly 54% of registered voters, with another large batch of ballots expected to arrive this afternoon. Typically, Tuesday and Wednesday are the days with the largest number of received ballots.

This leaves county elections sticking to their projected 68% turnout rate, or roughly 720,000 returned ballots, up from a 65% turnout rate and 635,753 ballots cast in 2006, the previous midterm election.

Of course, that’s just a projection, but in an year when Republicans are supposed to benefit from a huge enthusiasm gap, it is interesting to note that dark blue King County’s 68% projected turnout is actually a couple of ticks higher than the 66% rate Secretary of State Sam Reed is projecting for Washington state as a whole. Furthermore, King County elections officials tell me that they’re actually projecting 69% turnout for Seattle proper, with the less Democratic rest of the county coming in at 67%.

Again, these are just projections. But they sure do seem at odds with the national narrative.