There are not many gubernatorial contests this election cycle. I count only eleven. Still, the races we have hold importance in a census year, as Governors sometimes have a degree of control over the redistricting process. There is only polling for nine of these races, but the three states without polling (DE, ND, WV) seem unlikely to flip.

Of the nine polled races, the only state with a chance to flip is Montana. Governor Steve Bullock is term limited and running for a Senate seat. Republican Greg Gianforte has the upper hand over Democrat Mike Cooney, with an 87% to 13% probability of winning.

Here is the distribution of gubernatorial seats from the simulations: 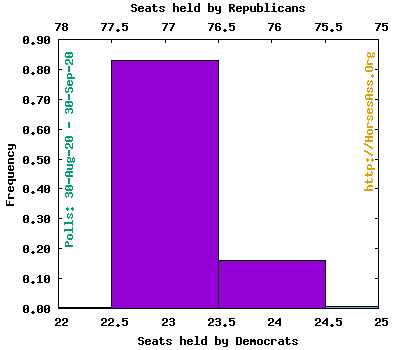 This table shows the number of seats controlled for different criteria for the probability of winning a state: Safe>0.9999, Strong>90%, Leans>60%, Weak>50%: