The civil war in Iraq continues to escalate, with American soldiers caught in the middle. A bomb tore through a crowded Baghdad market yesterday, killing at least 31 and injuring 51 others. At the same time, a marine fighting in Iraq’s Anbar province became the 100th US serviceman killed in October, the highest monthly death toll since President Bush famously announced “mission accomplished.”

Meanwhile, $133 million worth of weaponry has gone missing — nearly 4 percent of the pistols, assault rifles, machine guns, rocket-propelled grenades and other arms the Pentagon has supplied Iraqi security forces. Not that we could track these arms if we wanted, considering that the Defense Department has registered the serial numbers of only 10,000 of the 370,251 weapons it provided — less than 3 percent.

Both these wire stories appeared somewhere in today’s Seattle Times, but apparently neither was important enough to warrant a mention on the op-ed page of the our state’s largest newspaper. Instead, our fair city’s solemn guardians of public discourse chose to dedicate scarce column inches to yet another one-sided, partisan attack: “Denounce the ad, Darcy Burner.”

Compare that to the Seattle P-I, who on the very same morning chose to editorialize on trivial matters… you know… like the escalating violence in Iraq.

The president can’t be held directly responsible because he’s not up for election again. Short of impeachment and history’s harsh judgment, he won’t pay the price for a foreign policy folly that has made the world a more dangerous place.

But those who continue to aid and abet him in this disastrous policy are up for election, in just over a week, and voters across the country can and should hold them accountable.

Unless, of course, we want to stay the course.

As the P-I editorialists point out, in this election, “War is the issue“… an issue their colleagues at the Times seem determined to avoid until after election day. Because the Times knows that if voters do follow the P-I‘s advice, Dave Reichert will lose.

That’s why instead of addressing issues that voters truly care about, the Times editorialists are busy focusing on inside horse race bullshit, and rhetorical legerdemain like demanding Burner pull an accurate ad that she did not run.

But there is one TV ad benefiting Democratic congressional candidate Darcy Burner that is beyond the pale, not because of what it says but because it violates a copyright of TVW, Washington’s public-affairs network.

Oh my. In an age when Karl Rove takes a war hero who left three limbs on the battlefield, and morphs him into Osama bin Laden, it’s an alleged copyright violation that the Times finds “beyond the pale.” How shocking.

But the thing is, the DCCC ad doesn’t violate anybody’s copyright. Reichert spoke for about 20 minutes that day, and by any legal definition the few seconds excerpted by the DCCC constitutes “fair use.” I myself have posted to HA longer clips from Reichert’s speech, and I’ve yet to receive any cease and desist orders from TVW. And if I did, I wouldn’t comply.

To argue that the DCCC has violated TVW’s copyright would be like arguing that I have violated the Seattle Times‘ copyright by block-quoting the paragraph above. If that truly represents Times publisher Frank Blethen’s expert interpretation of the “fair use doctrine” then I challenge the Times to sue me now, because I promise you Frank, I’m going to violate your copyright again. And again and again and again. In fact, you know what Frank..? I’m going to violate you again right now:

Burner should denounce the ad and call for its removal.

Take it like a man Frank, and get used to it… because in this new media landscape of excerpts and aggregation, you’re my bitch.

Like their feigned outrage over nonexistent copyright violations, the call for Burner to pull the ad is a red herring. As is the Times‘ tangential reference to the fact that the Burner campaign had ordered a copy of the tape months ago, as the video has been freely available on the internet to all comers since it first aired in May. (I linked to it way back on June 1.)

In fact, the entire editorial is nothing more than an elaborate (if poorly constructed) straw man argument intended to distract from the simple, devastating truth behind the DCCC’s ad: Dave Reichert publicly admitted that the Republican leadership tells him when to vote against them.

The Times refutes this, accusing the DCCC of taking the quote out of context:

The TV ad depicts Reichert at a meeting saying GOP leadership comes to him and tells him how to vote, and he’ll take the vote.

But what the Times omits is the five minutes of rambling preamble in which Reichert puts the disputed quote entirely in context:

I’ll tell you that back in Washington there are lots of games played and I just want to give you, we talk about freedom and we talk about America and we talk about the dream. The dream has to include everybody and there has to be compromise and we can’t have, I’ve been to district meetings in my district where people have said, “why in the world should I vote for you. It’s just like voting for a democrat for crying out loud.” I am going to vote libertarian and I said, “you know what sir, that would be a huge mistake and here’s why.” I’ve tried to explain to this person how things work a little bit back in Washington D.C. and why certain votes have to be taken. Sometimes the leadership comes to me and says “Dave we want you to vote a certain way” and they know I can do that over here. Another district isn’t a problem but over here I have to be very flexible of where I placed my votes. The big picture here is to keep the seat, keep the majority, and keep the country moving forward with republican ideals. Especially on the budget and protecting our troops who’re protecting this country and how that will be responsible with taxpayer dollars. That’s the big picture. Not the vote I place on ANWAR that you may not agree with or the vote that I placed on protecting salmon. You have to be flexible. So when the leadership comes to me and says , Dave you have to vote over here because we want to protect you and keep this majority, I do it. There are sometimes when I say no I won’t. There are sometimes when things come to the floor like Schiavo. I was one of five republicans that voted with the Democrats on Schiavo because that was the right thing to do.

Yes, Reichert broke with the GOP leadership on the Schiavo vote. He’d personally been through a wrenching end-of-life decision in his own family, and so he says he voted his conscience. (It didn’t hurt that he also voted with his district.) But that’s the only vote of conscience he cites.

Taken in the context of the entire speech, Reichert makes it absolutely clear that conservative Republicans should ignore his handful of moderate votes on things like the environment because “certain votes have to be taken” in order to “keep the seat.” Reichert bluntly (and stupidly) told the audience that the leadership tells him when to vote against them, and that is exactly what his audience of Republican elected officials understood him to say. How do I know? Two of them told me. State Rep. Toby Nixon (R-45) called the confession “shocking,” but went on to explain…

To be clear, by saying “it was shocking” I was expressing the surprise I felt at the time that Rep. Reichert was so open and frank about being approached in this manner, not at the fact that it happened. It is, in fact, quite common for majority party leadership to go to freshman members of their party and provide such guidance, in order to provide cover for those freshmen in their first re-election campaign when they are most vulnerable to challenge. It happens quite frequently in the Washington State House of Representatives, too.

Surely, the Times editorialists understand this. They read my blog. They’ve seen Nixon’s quote. They know how the political game is played.

And yet they continue to defend Reichert’s cynically manufactured image as a “conscience-driven independent,” because they also understand that his reelection hopes pivot on his ability to separate himself in the eyes of voters from President Bush, the Republican leadership and their failed policies at home and abroad.

That is what this latest anti-Burner editorial is all about. The DCCC ad is devastatingly effective because it uses Reichert’s own words to debunk his myth of independence. It also shows up the Times‘ stubborn defense of Reichert’s fictional independence as either stupid or dishonest. (Again, I’m guessing the latter.)

Indeed, the Times incessant Burning-bashing is almost comical in its logic. When Reichert’s media folks aren’t making up quotes out of whole cloth, they rely on single-word quotations like an ad for a bad movie… and yet it’s the Democrats who the Times accuses of lifting quotes out of context. And while Reichert has run a relentlessly negative and at times sexist campaign, it is Burner who Times editorialist Kate Riley accuses of “conjuring rage.” (Curiously, in her unsigned editorial endorsing Reichert, Riley criticizes Burner for her lack of public service, yet apparently believes she’s more than qualified to represent the voters of the 4th CD. Go figure.)

Yes, Burner has attempted to define her opponent through strongly worded TV spots, but then, so has Reichert. No wonder so many readers, bloggers and journalists have found it absolutely impossible to take seriously the Times‘ one-sided, I’m-rubber-you’re-glue, reality-distorted portrayal of this race.

The truth is, the Times doesn’t want their readers to take this race seriously, because if they seriously discussed the issues at stake — the issues that matter most to local voters — Reichert would lose. That’s why instead of editorializing on the Bush administration’s failed policy in Iraq — a policy Reichert has given every indication he would continue to support — the Times has instead chosen to focus on a bullshit, manufactured, campaign ad dispute that voters couldn’t care less about.

Reichert said what he said: he votes the way the leadership tells him to vote. And that is why he’s going to lose this election.

UPDATE:
Per Another TJ’s suggestion: 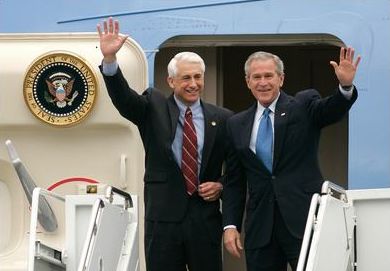