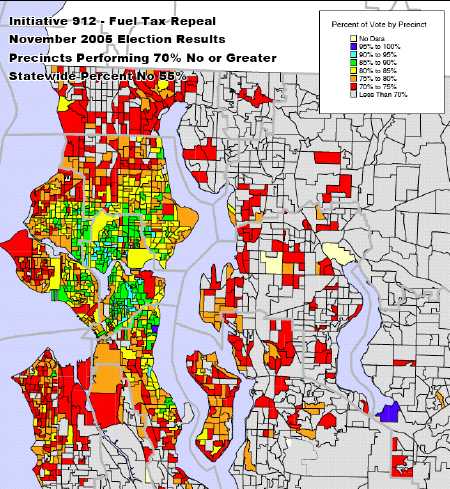 I was forwarded a couple precinct maps showing the vote on Initiative 912, and I thought the excerpt above was somewhat interesting. This map (PDF) shows those precincts which voted 70% or greater against I-912. Of course, the initiative was strongly opposed in Seattle, but look how poorly it did in Mercer Island, Bellevue and much of the Eastside.

I-912 — the love child of conservative KVI talk hosts John Carlson and Kirby Wilbur — was officially endorsed by the state GOP and many prominent Republicans… yet it went down big in traditionally Republican precincts. You might not know it yet by looking at the composition of the city councils, but these former GOP strongholds are steadily trending blue.

A year ago, in my post election analysis (“Subdivide and conquer: a strategy for a new Democratic majority“), I pointed towards this trend as one of the few hopeful signs coming out of the disappointing 2004 election:

Just like the Democrats lost their base in the South with their support of civil rights legislation in the sixties, the GOP risks alienating their moderate, suburban base by abandoning fiscal conservatism to focus on right-wing social issues at home, and military and economic imperialism abroad. The neo-cons may dominate the national Republican leadership, but they do not represent the majority of suburban voters.

Families move to places like Mercer Island for better public schools, cleaner streets, safer neighborhoods, and all the other public services that a higher property tax base provides. These are people who believe in government because they benefit from it every day, and they routinely tax themselves to pay for the services they want.

These are people with whom urban Democrats have common ground, and we have an opportunity to exploit the wedge the neo-cons have provided, to expand our base politically and geographically. For in addition to a shared belief that good government is necessary to maintaining a high quality of life, suburban and city voters have a mutual interest in maintaining an economically and culturally vibrant urban core.

One shouldn’t read too much into the precinct maps from a single election, but the vote on I-912 certainly does nothing to counter the trend we’ve been seeing for years. Even as Democrats have lost ground in Eastern WA and other rural areas, we have gradually become the majority party in many populous, close-in suburbs.

But my sense is that this shift is as much a result of what the GOP has done wrong as it is what the Democrats have done right (or even, simple demographics.) I’m constantly hearing from self-described moderate Republicans who complain that their party has left them, rather than the other way around. The challenge for Democrats is to convince these suburban voters to change their party identification, not just their votes, much the same way the GOP eventually accommodated and absorbed the old southern Dixiecrats.

This process could take decades, so if you’re a Democrat, I’d take the map above with a grain of salt. But if you are Republican, I advise you to take it with a couple of aspirins and fifth of whiskey, for there’s nothing about these trends that looks good for your party’s prospects.