If you were online at all today, you probably saw a headline like this one from Reuters:

U.S. teens smoke more marijuana, but back off other drugs: survey

The article starts out with fingers pointed exactly where we’d expect them to be pointed:

U.S. teenagers are smoking more marijuana, but backing away from other harmful drugs and doing less binge drinking, according to a report from federal health researchers released Wednesday.

Easier access to marijuana provided by new state laws allowing the drug for medical treatment may be a factor, according to the report from the National Institutes of Health.

More teens are smoking marijuana in part because they see less risk from regular use, according to the “Monitoring the Future” survey.

There’s only one small problem. The data in the Monitoring the Future survey doesn’t really back this up at all. If you click to the survey here, they have excellent charts showing just how weak this claim is. Here’s the chart for those in 8th, 10th, and 12th grade who’ve reported using marijuana in the past year: 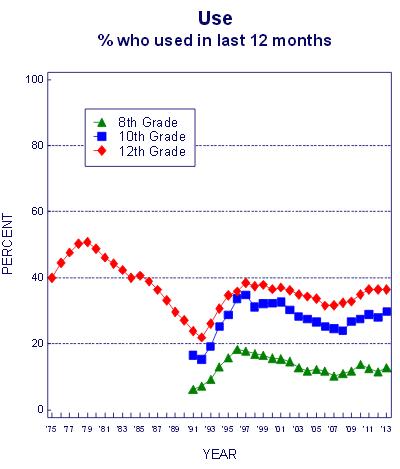 The percentage of teens reporting marijuana use has been relatively steady since the mid 1990s and still much lower than the late 1970s. The chart of those reporting daily use is a little closer to showing some kind of increase, but still well below use levels in the 1970s. 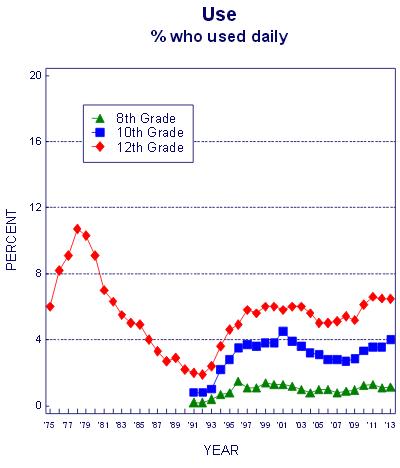 The purpose of all of this isn’t a mystery. Anti-drug groups are desperate to find ways to show how drug law reform is backfiring. They like to point to surveys that show that people perceive marijuana as being safer than they used to. Well, yeah, they probably should. Americans in general are learning more and more that marijuana is safer than we’ve been told. But that hasn’t translated into any big spikes in use among teens. Why? Probably because of this chart, which shows what percentage of 8th, 10th, and 12th graders say that marijuana is “fairly easy” or “very easy” to get: 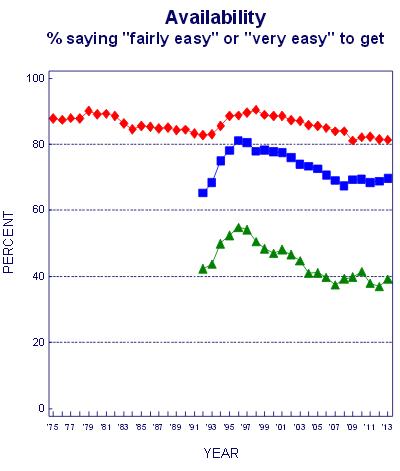 That’s the real story here, that the gradual regulation of marijuana markets has the opposite effect on teen availability than what we’ve long been led to believe. But this chart and what it shows isn’t what makes the headlines. Instead, imaginary claims from government officials are uncritically passed along as news, and the important story is buried.