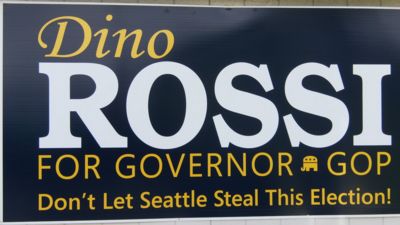 Via The Other Side Online, a photo of the Rossi signs that have been popping up all over Eastern Washington.  Notice there is no “paid for” notice as required by law, allowing Rossi to deny responsibility, but really… we all know these professionally printed signs are as much a part of the Rossi campaign as the BIAW’s multi-million dollar media blitz.

But you know, what’s good for the goose is good for the gander.  If it’s okay for Rossi to stoke anti-Seattle passions in Yakima, while the media covers for him back here, then I think Seattle voters deserve to see the same message, paid for by equally anonymous benefactors.  So I’m going to anonymously check out what it costs to put up this sign on a prominent billboard in downtown Seattle, and then anonymously launch an anonymous fund drive to pay for it.