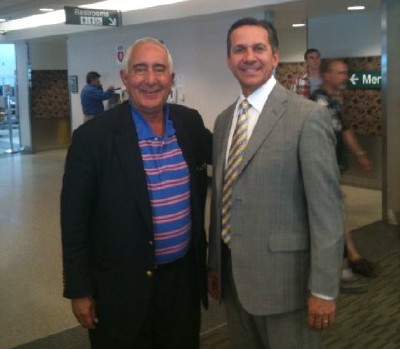 As the image and the tweet make clear, Dino Rossi ran into Ben Stein at the Spokane airport last week, and got him to contribute some money.

Good for you, Dino. And I’m sure the support of one of Richard Nixon’s speechwriters will go a long way toward persuading both teabaggers and independents that you’re a different kind of Republican, rather than, you know, the run of the mill corporatist hack you generally come off as.

But apart from the rather desperate sounding plea for more money (“Anyone else? Anyone? Anyone!!!!?“), the tweet got me thinking: in addition to airports and money, what else do Rossi and Stein share?

For example, the Wall Street reform bill on which Rossi finally broke his monk-like, issue-related silence… where does Stein stand on that? Rossi opposes it, erroneously saying that would leave taxpayers on the hook for another financial bailout; he even calls on Murray to “stand up to big banks” and vote it down.

And Stein? Well it turns out that Wolf Blitzer recently asked him about the bill on CNN’s The Situation Room:

BRAZILE: Ben, at least use their money to fail and not the taxpayers’ money to bail them out.

STEIN: Well, maybe sometimes you do need to use the taxpayers’ money to bail them out. If we had bailed out Lehman Brothers we wouldn’t have had this colossal recession. It would have cost 10, 15, $20 billion to bail them out. Instead we’ve lost trillions because of this recession. A stitch in time as they say saves nine. We should have saved Lehman Brothers. It was too big to fail. We let it fail anyway and we got a catastrophic recession that hurt the smallest and weakest among us.

So Rossi opposes Wall Street reform because he says it leaves taxpayers on the hook for another bailout — even though the bill includes a Patty Murray sponsored amendment that prohibits exactly that — at the same time he’s touting a contribution from Ben Stein, who likes the bill “pretty well,” but opposes it because “Too big to fail is not a bad idea… sometimes you do need to use the taxpayers’ money to bail them out.”

Uh-huh. So which candidate is it exactly who voters can best rely on to “stand up to big banks”…? It’s hard to imagine it’s a Ben Stein Republican like Dino Rossi.