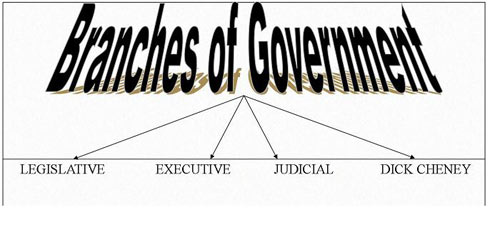 It’s hard to be a loyal Republican these days.

When Vice President Dick Cheney refused to comply with an executive order regarding classification and declassification of government materials — asserting that his office “does not consider itself an entity within the executive branch” — even arch-conservative Instapundit criticized the argument as “politically idiotic and legally self-defeating.”

The Vice President really isn’t an Executive official, and isn’t part of the President’s administration the way that other officials are — for one thing, the VP can’t be fired by the President: As an independently elected officeholder, he can be removed only by Congress, via impeachment. (In various separation of powers cases, the Supreme Court has placed a lot of weight on this who-can-fire-you test).

It certainly does. And Rep. Rahm Emanuel (D-IL) is striking back with the inevitable retort, introducing an appropriations amendment that would eliminate funding for Cheney’s office.

While it is fun to ridicule Cheney for his “man-size” safe, his disappearing emails, and his penchant for spying on White House staffers — Fox News commentator Juan Williams described the VP’s machinations as “a game in order to keep Dick Cheney in, I guess, some sort of secured undisclosed bunker of his mind” — these latest revelations are also somewhat frightening. That Cheney would even attempt to argue that his office is legally exempt from both executive orders and congressional oversight is an offense to the Constitution, and a shocking example of just how fragile our democracy can be in the hands of man who does not respect our democratic institutions.