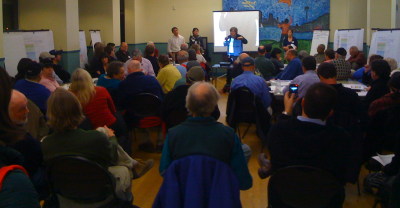 Winston Churchill once quipped that “Democracy is the worst form of government except for all those others that have been tried,” and nothing bears that out more than Seattle Public Utilities’ packed workshop at the Rainier Community Center last night, where angry citizens gathered to loudly voice their (sometimes ill-informed) concerns over the North Henderson Combined Sewer Overflow Reduction Project.

That’s right, over sixty citizens gathered on a Wednesday night to debate storm water overflow reduction alternatives, a heartening and surprising display of grassroots democracy in action. Unfortunately, a handful of attendees quickly disrupted the meeting out of misplaced fear that SPU was intent on seizing their private property (by far the least likely outcome of any project of this sort), and/or in staunch opposition to spending any rate payer dollars to reduce the 100 million gallons of raw sewage contaminated storm water Seattle dumps into its waterways every year. One woman even angrily stormed out of the meeting after being informed that yes, she would be required to pay for this citywide project whether she wanted to or not. Sigh.

I suppose it’s unfair to refer to these angry citizens as “teabaggers,” as I did in a tweet last night, for there didn’t seem to be anything organized or overtly political about their actions. But in their knee-jerk assumption that government was out to get them and their wallets, and in their willingness to disrupt the proceedings for everybody else, in the service of loudly voicing their own personal objections, they sure did appear to embody the spirit of the Tea Party movement.

And, just like the teabaggers, they didn’t seem to want to let any facts get in the way of their outrage. This was the fourth such meeting with SPU I’ve attended in my efforts to help safeguard the interests of tiny Martha Washington Park, and it was more than a little frustrating to waste so much of my time on some angry newcomer yelling about tunneling and soil conditions, when by this point in the process it is already clear that the preferred alternative for North Henderson is unlikely to include any tunnels at all. As for that angry woman and the others who objected that Lake Washington was already “clean enough,” had they bothered to listen to what the SPU reps were telling them, they might have understood that yes, their objections were being heard… but they were objecting to the wrong people. SPU didn’t establish the policy to reduce storm water overflow to one event per year per outlet—the EPA and the state legislature did—and SPU must meet this mandate or risk legal and financial consequences.

I guess the point is, democracy is hard. It’s complicated. It’s messy. It’s inefficient… perhaps, especially at the community level. But it becomes nearly impossible when citizens enter it so profoundly skeptical and distrustful of the democratic process itself.