Until yesterday’s scandal broke, Haggard was the pastor of a 14,000 member Colorado Springs mega-church, and the president of the 30-million strong National Association of Evangelicals. He is also a close advisor to President Bush and the primary backer of Colorado’s anti-gay marriage amendment.

What with so many of our most prominent gay-bashers turning out to be closeted homosexuals, it’s almost getting to the point where straight men will start strutting their support for gay rights, as a sign of their own machismo. Fearful of being perceived as gay by bashing gays, men will start picking up women with slick lines like: “Hey babe, I support marriage equality for same-sex couples, how about you?”

(Actually, considering how my gay friends in college always had the most beautiful women hanging on them, I’ve often wondered if the most effective pick-up technique might be to actually pretend to be gay myself.) 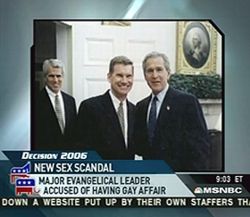 Perhaps the most shocking part of these allegations is how unschocked most Americans seem to be about the news. A right-wing, gay-bashing evangelical preacher/politician outed as a meth-snorting closeted homosexual? Tell me something I don’t know. Jim West, Mark Foley, Ted Haggard, the mule-fucking Rev. Neal Horsley… right-wing hypocrisy is now so commonplace it barely warrants a headline.

Still, you can’t help but believe that there will be political fallout from Haggard’s high-profile fall from grace as the Republican’s usually reliable evangelical base struggles to energize itself on behalf of a party that simply doesn’t practice what it preaches. I guess we’ll find out Tuesday.