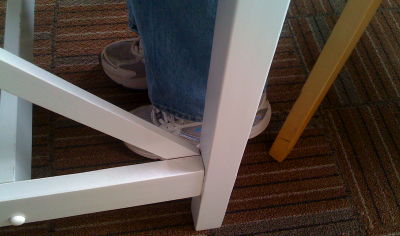 I just got back from Nollie’s Cafe, where Sen. Patty Murray sat down this morning with a handful of local bloggers electronic journalists online-ish media types who write substantively on politics. (Are Erica Barnett of PubliCola and Eli Sanders of The Stranger “bloggers?” Am I a “journalist?” I don’t wanna go there.) In addition to me, Erica and Eli, we were joined by Joan McCarter of Daily Kos, Dave Neiwert of Crooks and Liars, and Andrew Villeneuve of the NPI Advocate.

We were promised a half an hour, and got a bit more than that from a U.S. senator who clearly knows the issues as much as she obviously cares about them. A similar coffee klatch with the nearly totally inaccessible Dino Rossi would be almost unimaginable, and it is equally hard to imagine Rossi coming off anywhere near as knowledgeable or as thoughtful as Murray on such a broad range of topics. (Nor as down-to-earth likable, either.)

So much for the GOP’s self-soothing meme of Murray as the dumbest member of the Senate. But don’t take my word for it, you can listen to all 38 minutes for yourself:

I’ll come back with a more thorough report later, after I’ve had the opportunity to listen to the audio and parse my illegible notes, but I came away convinced that if every voter in Washington state could have the same opportunity to sit down with Sen. Murray for half an hour, she’d win reelection in a landslide.