My previous analysis in this race showed Secretary Clinton just barely leading Sen. Rubio 65% to 35%. Rubio was second to Jeb Bush in performance against Clinton. In the intervening weeks, Rubio has started to crawl out of the mid-tier rankings in the G.O.P. primary. A week ago he placed third in SC, and today we see he is second in NH

Rubio’s primary “surge” hasn’t translated into general election gains. He seems to be losing ground to Clinton. Now after 100,000 simulated elections, Clinton wins 92,430 times and Rubio wins 7,570 times (including the 404 ties). Clinton received (on average) 304 to Rubio’s 234 electoral votes. In an election held now, Clinton would have a 92.4% probability of winning and Rubio would have a 7.6% probability of winning. 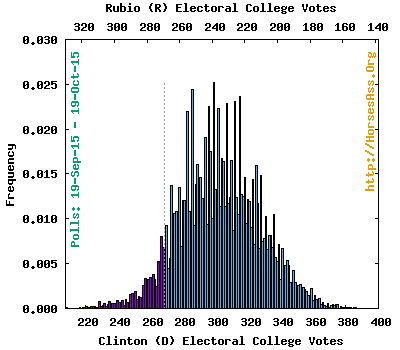 The long term trends in this race can be seen from a series of elections simulated every seven days using polls from 19 Oct 2014 to 19 Oct 2015, and including polls from the preceding month (FAQ). 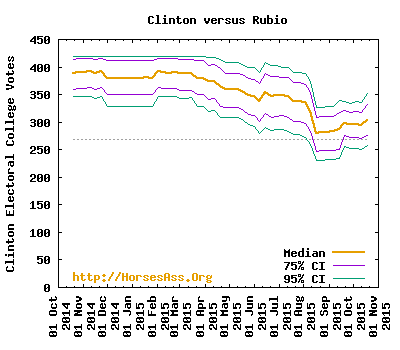