Obama takes great care to conceal the fact that he is a Muslim. […] It is reported that Obama swore his oath of office using the Koran and pictures have shown him standing for the Pledge but not reciting it and holding his hands to his side while others place their hands over their hearts.

This is chilling information about a candidate for the highest office in the Country especially given the radical Muslim claims that they will destroy American from “the inside”.

Really. I’m not making this up. Jon Devore gets the credit for exposing this pathetic attempt at swiftboating Obama, and just in case the Clark County GOP attempts to cover up their shameful hate-mongering, Jon’s captured a screen shot for posterity. 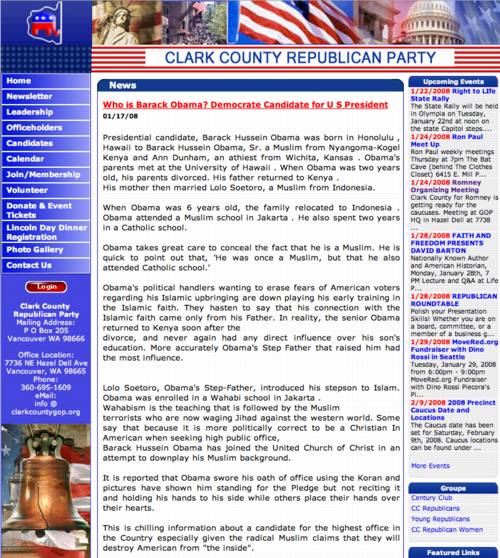 FYI, I’ve Googled several distinct phrases from the Clark County GOP’s post, and the only thing that comes up is the post itself, so either they copied it from an email or party memo, or they actually composed this garbage themselves. What a bunch of wankers.

UPDATE:
Gee, that was fast…