[NWPT47]No doubt, there has been a lot of anger in some quarters over the Legislature’s decision to raise the gasoline tax 9.5 cents over four years. The question, however, is anger over what?

There’s been talk about legislative “arrogance”… you know, like the arrogance of the Legislature for actually passing legislation. But really, much of the opposition to the gas tax is simply based on the fact that people don’t like paying higher taxes. Hell… who does? Still, while 9.5 cents tacked onto our existing 28 cent gas tax seems like a lot of money, I couldn’t help but wonder how high our gas tax really is, in real dollars, relative to historical levels. My preliminary research might surprise some people. 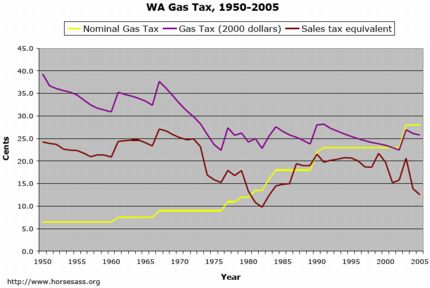 The chart above plots three lines, the Nominal Gas Tax in pennies per gallon, the gas tax in year-2000 dollars, adjusted using the Gross Domestic Product Deflator, and the gas tax expressed as a sales tax rate (tax per gallon / national average for regular gas.) I’m working on a more in-depth report, and will make my raw data, references and methodology available at that time, but while the specific numbers may adjust slightly in the final analysis, the trends will remain the same.

As you can see, while the nominal gas tax rose from 6.5 cents per gallon in 1950 to the current 28 cents in 2005, the actual cost of this tax both in real dollars, and as a percentage of the price of a gallon of gas, has substantially declined over the past 55 years. Once the full 9.5 cent increase is implemented in 2009, the total nominal gas tax of 37.5 cents per gallon would only come to 32.2 cents in year-2000 equivalent dollars, according to current GDP projections. That figure is well below historical highs, and will decline steadily in the years that follow, as inflation eats away at its value.

This is, after all, the nature of excise taxes. Because they represent fixed dollar-values per unit, rather than a percentage rate like most taxes, inflation causes the revenue per unit to decline over time, unless the tax is periodically increased. For example the nickel a gallon hike in 2003, only brought the gas tax (in real dollars) back up to 1991 levels… the last time the tax had been raised. Yes, revenues continue to rise with consumption, but the gas tax is a user fee, mandated by the state constitution to be spent on roads only, so increases in consumption also represent increased wear and tear on existing roads, as well as increased demand for new infrastructure.

So as we continue to discuss the gas tax, and the initiative to repeal it, I think it is important to understand that we’re not really talking about raising the gas tax, as much as we are adjusting it to keep pace with inflation.