Listening to the Randi Rhodes Show on Air America Radio the day after the first Kerry-Bush debate, I was initially taken aback by several callers, who suggested that Bush was secretly being prompted via a hidden earpiece. I knew Bush was a liar, but it hadn’t occurred to me that he would actually risk being caught cheating.

Randi’s staff quickly whipped up a very amusing sketch, in which the angry voice of Dick Cheney is heard barking instructions in his ear, as Bush rambles in the background. 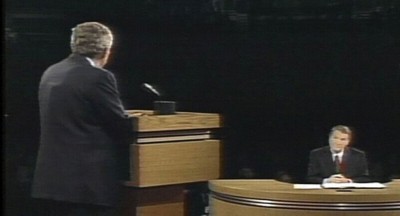 Well, sometimes paranoid rumors turn out to be true, and an article in Salon today suggests that Bush was indeed wired for the first debate: “Bush’s mystery bulge“. The article includes the photo above, captured from CSPAN video… that clearly shows some sort of device underneath Bush’s suit jacket, with what appears to be a wire leading up towards his neck.

According to IsBushWired.com (talk about a specialized blog), Bush’s speech rhythms, word choices, and constantly shifting eye movements all suggest he is being fed lines and cues from offstage. And other evidence suggests he has been using an earpiece for some time:

Television viewers have sometimes heard another voice speaking Bush’s words before he says them. When Bush spoke at D-Day ceremonies in France last June, for example, viewers watching on CNN, Fox and MSNBC, including mediachannel.org’s Danny Schechter, were startled to hear another voice speaking Bush’s words as if to prompt him. Some said this continued into a q & a. And on the night of 9/11, when Bush appeared on television to address the nation, viewers of one television station in Quincy, Massachusetts heard another voice speaking, slowly and carefully, a few words at a time — words which were then recited by the president. The voice was nondescript, male, definitely not the president’s voice, says Quincy resident Robyn Miller. This went on for at least four sentences, she says, and then the “extra” feed was cut off.