US Rep. Dave Reichert’s spin on Democratic challenger Darcy Burner is that her campaign fund is bolstered by out-of-staters—those carpetbagging netroots folks.

And the Seattle Times ran with that angle earlier this month:

The outpouring reveals an aspect of Burner’s rematch against U.S. Rep. Dave Reichert that is under the radar for many 8th Congressional District voters: While her campaign talks up her blue-collar roots and family life, online activists from all over the country see her as one of their own.

Her immense popularity among the netroots — an informal, progressive group of bloggers — has boosted her campaign and helped her raise more than $2.3 million, topping Reichert, the Republican incumbent.

But Burner’s critics, including the Reichert campaign, are using those ties against her. They argue that she can’t represent the interests of the 8th District when some of her biggest supporters are liberal bloggers who never have set foot in Seattle’s eastern suburbs.

“Darcy Burner is pretty open about the fact that she wants to go to Congress to represent the netroots,” said Reichert’s campaign manager, Mike Shields. “That is her constituency, and that is who she’s raised money from, and so that’s who she’ll do the bidding of.”

The Seattle Times‘ sensationalized spin about carpetbagging left out some important context that shows Burner isn’t a puppet of funders from out of state. If you compare Burner’s and Reichert’s donations, you see that Burner has more in-district donors and more in-state donors than Reichert.

According to analysis of Federal Elections Commission records of individual donors at $200 or above (the level at which biographical info is available) done by Dan Kirkdorffer, a Burner supporter from the 8th District, Burner has 581 in-district donors compared to Reichert’s 446 in-district donors. Burner has 1,311 in-state donors compared to Reichert’s 922 in-state donors.

Reichert’s rejoinder could be that a higher percentage of his donations come from in the state and in the district. And that’s true. But Burner has more local donors total, which is a far more significant statistic when making claims about hometown support. For example, she has 42 percent more in-state donors, and 30 percent more in-district donors, than Reichert.

According to Act Blue, the netroots fundraising site, Burner has raised $544,837 from their online donors.  She’s raised about $3.1 million overall, which means netroots donors account for only 16 percent of her money.

Certainly, Burner has a large number of Act Blue donors, over 15,000 according to Act Blue. Some of these donors are captured in the analysis of FEC reports—others are not because many Act Blue donors fall below the $200 level. While those donors would certainly bump up the number of Burner’s out-of-state contributors, they’d also bump up her in-state donor tally, increasing her lead over Reichert on that score.

Another important part of the fundraising story to consider is donations from PACs. Those donations are not figured into the in-state vs. out-of-state equation.

PACs, political committees that represent corporations and unions, made up 31 percent of Rep. Reichert’s total campaign fund according to the latest online data at the FEC (which doesn’t yet include the most recent fundraising reports.) PAC giving makes up only 13 percent of Burner’s haul.

I have a call into Reichert’s campaign to ask them to address their claim that Burner’s financial support—which is deeper at that local level than Reichert’s—isn’t local enough.

There is a bigger issue at stake in this election that local SP readers should consider if they are not yet engaged in this race: if burner wins, she will prove that even a candidate with no experience, no real connection to her community, who is to the left of the local voters, can raise enough money from national activists that they can elect someone in YOUR local district. This will embolden them to futher this model nationally. Those activists may not have succeeded in winning any policy debates, but if they start overpowering local voters with money they can begin installing members who think like them who WILL win their policy debates for them. This is the movement they are openly trying to create and they will absolutely be emoldened if burner wins. She may not seem like she is conecting here, but she’s a national netroots celebrity. You can help stop them and disprove the paradigm by helping us at reichert’s campaign:www.davereichertforcongress.com.

Note: The possibility exists that this comment wasn’t actually left by the same Mike Shields who’s running Reichert’s campaign, but if that’s true, Shields has had nearly two weeks to correct the record.

Here is Kirkdorffer’s analysis. (These numbers include local Bush fundraisers for Reichert, which may artificially inflate Reichert’s local donor numbers. Also, Burner’s number of “In-District Maxed Out” Donors, 54, should be in bold, not Reichert’s lower number of 49.) : 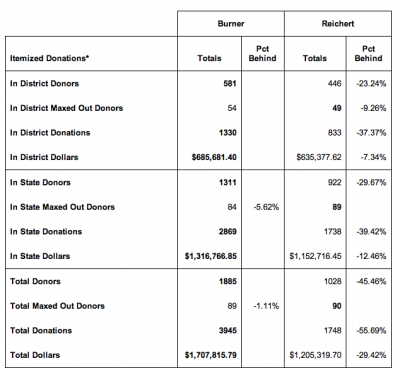