Hey… it turns out not all “extreme right-wing” Republican state legislators are closeted homosexuals. Who knew?

State Rep. Jim Dunn will be stripped of his committee assignments and denied travel reimbursement after the 17th District lawmaker made what even Dunn acknowledged was an “inappropriate” remark to a woman at a legislative function in the Tri-Cities last month.

“We want to have zero tolerance for our members for inappropriate comments,” said House Republican leader Richard DeBolt. “We asked (Dunn) to go get sensitivity training. Until he does that, he won’t be serving on any committees.”

He was buying her a drink and said something like, in his words, “I’m buying you this so I can take you home, something like that.” 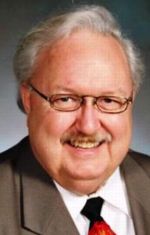 Yeah. Something like that. Though judging from Dunn’s photo, I’m guessing he’d have to buy an awful lot of drinks before he’d ever have a chance of a young lady coming home with him. Maybe a fifth of Everclear and roofie. And a paper sack over his head.

Dunn says he didn’t really mean it, which is of course what we all tell ourselves after we strike out, but that’s not really the point. Rep. Sharon Tomiko Santos (D-37), who was at the table, says the remark was far more explicit and inappropriate than Dunn recollects, and describes a Republican sitting next to her as “absolutely mortified.”

How explicit? Well, Dunn claims that DeBolt actually asked him to resign, potentially putting this rare, Republican, swing-district seat into Democratic hands. It beggars the imagination.

Nah… no it doesn’t. Post in the comment thread your guess of what Dunn actually said, and we’ll vote on the most creative suggestions in a later post.