During an ongoing media teleconference call, USDA/FDA officials have revealed that melamine-tainted “protein concentrate,” imported from China, contaminated fish meal manufactured in Canada. The tainted fish meal was then distributed to an unknown number of fish farms in the US and Canada.

UPDATE:
FDA refuses to reveal how many fish farms and in which states. But you can be pretty damn sure that NW farmed salmon is likely on the list. 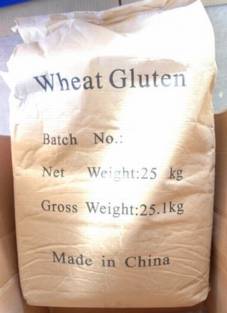 UPDATE, UPDATE:
I just have to say that this is STUNNING. Two months after first determining a problem with “wheat gluten flour” they only now determine it was really plain old wheat FLOUR? Anybody who has ever baked bread would have been able to tell the difference… the two products have different color and texture. Mix in a little water and rub it between your fingers, and you can tell the difference with your eyes closed.

UPDATE, UPDATE, UPDATE:
The image to the right is an actual photo of an actual melamine-tainted sack of “wheat gluten” imported by ChemNutra. As the FDA made clear today, the bag is labeled “Wheat Gluten”, but the contents were actually wheat flour adulterated with melamine to spike the nitrogen content. Wheat flour might typically contain 14-percent protein by weight. Wheat gluten (or more appropriately, “vital wheat gluten flour”) contains a minimum of 75-percent protein by weight. This helps explain the surprisingly high levels of melamine found in some samples.