TAMPA, FL- Congresswoman Katherine Harris, the Republican candidate for the United States Senate, soundly defeated Bill Nelson this evening by a 54% to 45% margin in the straw poll conducted at the Lakeland Bi-Annual Politics in the Park. The Harris campaign continues to build momentum, engendering tremendous grassroots support throughout the state with a pro-growth, pro-family message that resonates across the political spectrum.

Congresswoman Harris commented, “I appreciate the strong support of a majority of voters who are disillusioned with Bill Nelson’s lack of leadership and his record of voting against Florida’s best interests. I will fight for Florida in the United States Senate.”

The Lakeland Bi-Annual Politics in the Park straw poll illustrates the widespread support that exists for Harris’ consistent message of cutting taxes, eliminating wasteful spending, protecting the institution of marriage and opposing amnesty for illegal citizens. Congresswoman Katherine Harris is the only candidate with a demonstrated record of leadership who will fight for Florida’s values in the U.S. Senate.

See, this is what they mean by “Katherine Harris Crazy.” You can’t make this shit up. 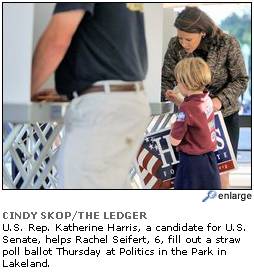 Really… you can’t make this shit up.