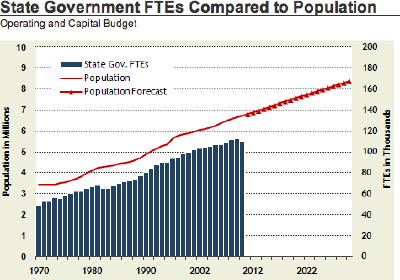 I wasn’t going to post this particular graph as it should be pretty damn obvious from the previous post that full-time equivalent (FTE) state employees couldn’t possibly be growing out of whack, what with state government steadily shrinking as a percentage of the economy, and employee compensation representing the largest chunk of government outlays. But the question was raised in the previous thread, along with the word “bloated,” so, well, here it is.

Again, I know the Republicans and their surrogates in the media keep pounding home the point that state and local government spending is out of control, but that doesn’t make it true.