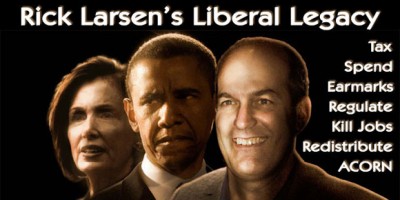 Click on over to Republican challenger John Koster’s website, and you’ll learn some interesting things about Democratic incumbent Rep. Rick Larsen’s “legacy.” Like, the fact that, apparently, he’s black.

Notice how the Grand Photoshop Wizards at the Koster campaign have attempted to color in Larsen’s and Pelosi’s complexion to match that of President Obama? Nope… no subliminal message there. And you won’t find one on Koster’s recent mailer either, which features the exact same picture on the front, while displaying a lilly white Koster and supporters on the back.

No doubt the Koster campaign will deny any mischief, but let’s just say you can color me skeptical.