While I’m a firm believer that the key to establishing and maintaining a progressive majority is to elect progressives to those very local offices that comprise the heart of grassroots politics, outside of Seattle, I don’t cover these sort of races — council, school board, commissioner, etc. — nearly often enough. Unless there’s some sort of scandal or boneheaded blunder to make fun of, I’m at least as guilty as my friends in the local legacy media of allowing very local politics to fly way too far below our radar.

But occasionally a curious piece of local politicking catches my attention, such as the press release sent my way from first-time candidate Maureen Judge announcing she’s earned the endorsements of the entire 41st Legislative District delegation in her race for Mercer Island City Council, Position 3. That includes not only Democrats, Sen. Brian Weinstein and Rep. Judy Clibborn, but Republican Rep. Fred Jarrett. Now I don’t know much about Mercer Island politics, but I’m guessing this kind of broad bipartisan support, combined with the $8,000 she’s already raised in her first month of campaigning, might scare off additional challengers.

That said, in the interest of full disclosure, I should also mention that I do know a few things about the candidate. Okay… I happen to know Maureen pretty damn well. Um… she’s my baby’s momma. 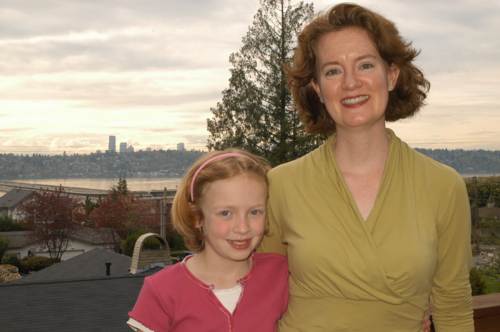 (In case you’re wondering, Katie has my eyes. And my sick sense of humor.)

And while I suppose this sort of disclosure might raise red flags amongst Mercer Island Republicans, they should at least take comfort in the fact that Maureen had the apparent commonsense to divorce me. Can’t get much more bipartisan than that.

So for what it’s worth, “Mo” has my full support. Send her money. And if you live on the Island, send her your endorsement.

As for her opponents, well, they have my sympathy. Mo has already proven to be an energetic and effective campaigner, and damn, she’s a helluva lot more likeable than I am. Go ahead, try to beat her at something she really cares about. Hell, I never did.