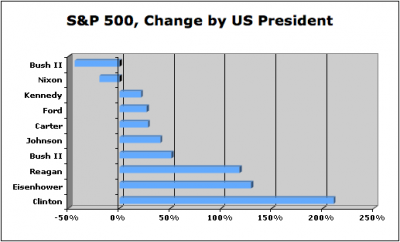 I’ve had some complaints that it’s really not fair to chart the performance of the Dow Jones Industrial Average under George W. Bush compared to other presidents, as the DJIA isn’t all that broad a measure of market performance.  So here’s a chart of the S&P 500… which has done even worse under Bush than the Dow.

FYI, had you invested $100 in an S&P 500 index fund on inauguration day of 2001, it would now be worth less than $46 in inflation adjusted dollars.  So much for the CEO president.