Under the 2001 Legislative District map, the northern border of the 46th was the entire northern city line (Sound to Lake) of Seattle. It was one of three LDs completely contained within the city, joining the 36th and the 43rd. Unlike those other Seattle-only LDs, which were also entirely within the 7th Congressional District, a small portion of the 46th was in the 2001 version of the 1st CD. The 2001 borders of the 46th LD, at a 1:60,000 scale, are shown below: 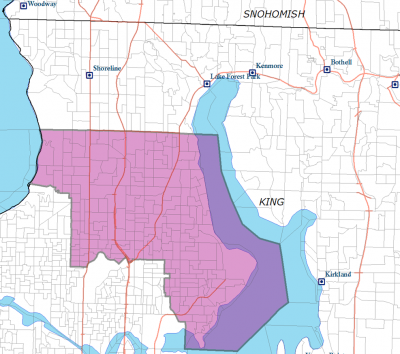 For reference, the 2001 boundaries of LDs are the pink/purple region. Major bodies of water are blue, major roads (state or federal highways, for the most part) are red lines, counties are named in ALL-CAPS ITALICS and delineated with heavy black lines, precincts are lighter black lines, and cities are displayed as blue “dot in square” symbols and name labels. These color conventions will be used throughout this series, and additional conventions will be described as we display them on maps.

The 2001 version of the 46th LD, then, consisted of northern and northeastern Seattle. In the new 2011 map, the 46th breaks out of Seattle, generally moving to the northeast of its previous location. It loses its former western portion to the 36th and 32nd Districts; the latter LD regains some of the Seattle precincts it had had in 1991. The 46th’s border with the 43rd is slightly changed, and it takes its new non-Seattle section largely from the old 32nd. In the following map of the new 46th, the LD is shaded in green. This map also shows the boundaries of the 2011 Congressional Districts, marked in thick dashed blue lines and labeled as “WA-x“.

Note also that all maps in this post cover exactly the same area, at the same scale (1:60,000 for the 46th LD). The only differences are in the “layers” placed on the map. 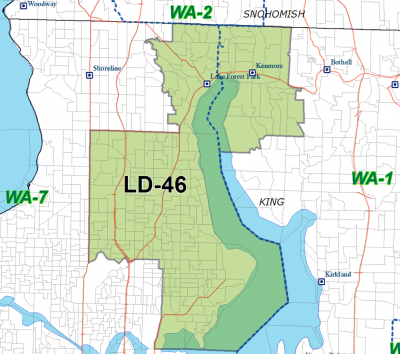 As in the 2001 map, the 46th is mostly in the 7th CD, with a portion in the 1st (though of course it’s a very different CD than the old 1st Congressional District). The 46th now extends up and around the northern end of Lake Washington. The King-Snohomish county boundary now defines the northern border of the LD and the southern border of the 2nd CD. None of the new 46th Legislative District is in the new 2nd Congressional District.

Now that we’ve seen the old and new borders of the 46th, let’s superimpose them on one another. That will more clearly display where and how the boundaries of the LD have changed. In the map below, the colors of the earlier maps are retained where there is no overlap. Territory that is no longer in the 46th Legislative District remains pink/purple, and areas newly encompassed by the 46th remain green. Areas within both the 2001 and 2011 versions of the LD are displayed as a brown region. 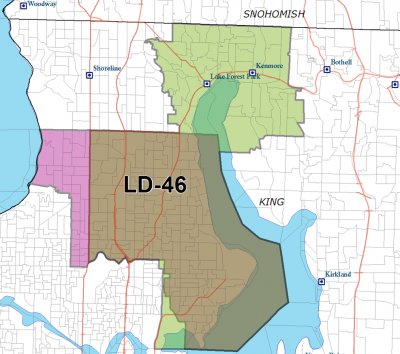 So how will these changes affect this year’s elections in the 46th? Let’s make it clear from the start — there’s no chance whatsoever that a Republican will win any of the LD’s seats in the Legislature. Lake Forest Park and Kenmore are just as Democratic as Broadview and the northwest corner of Seattle. Although two of the three seats have incumbents, neither Frockt nor Pollet was elected to his current position. Frockt did stand for election to the House 1 seat before being elevated to the Senate after Scott White’s untimely death, but Pollet is in the House based only on the votes of PCOs (in the old 46th). The principal factor to be considered by the candidates, then, is making themselves known to their new non-Seattle constituents. I would suggest that those candidates whose political bases are rooted primarily in the 46th District Democrats organization might be at something of a disadvantage against those who are better know “publicly”.

In the race for the open House 2 seat, the action will likely unfold in both the primary and the general election. It’s possible, however, that the crowd of Democratic candidates might divide the primary vote so evenly that the Republican (yes, there is one) could sneak into one of the two November slots. That would make it less bloody in the general, as the surviving Dem would be a sure thing if facing a Republican, but I doubt that any of the Democrats are working under that assumption.

What might have been a wildcard thrown into the mix — a candidate living in the new non-Seattle portion of the 46th — appears to have been circumvented. The Lake Forest Park home of Representative Ruth Kagi (D-32) was redistricted into the 46th, but she has already stated that she will move into the reconfigured 32nd LD and run for re-election there.

While the filing deadline is still almost three weeks in the future, Senator Frockt is currently running unopposed. Representative Pollet has drawn one Democratic opponent thus far, though the choice of which seat a candidate might run for is still fluid. Also, there’s nominally still time for a non-Seattle candidate to throw his/her hat in the ring, though it doesn’t seem likely.

Open seats in Legislative Districts almost always draw large packs of aspiring candidates. Significant alterations in district boundaries, as in the 46th (and the 11th, but not 36th), add even more spice to the competition.