In this post (the third in my series on LD redistricting), the topic is still another Seattle-area Legislative District with an open seat. I have a lot of connections with the 36th, not least of which is that my sister and her family live there. Also, as we’ll soon see, my own precinct used to be — but is no longer — right on the border between the 43rd and the 36th.

NOTE: a click on the “Click to continue” link below will open the key to definitions of the meanings of the various colors and other symbols on the maps.

The 36th District is quite compact, and its borders didn’t change very much in the recent redistricting. It still encompasses most of Belltown and all of Queen Anne, Interbay, Magnolia, and Ballard. Like the 43rd to its east, but now unlike the 46th to its northeast, it lies entirely within the city of Seattle. Not only that — the 36th LD is also entirely within Jim McDermott’s Congressional District (WA-07) and entirely within Larry Phillips’s King County Council District (KC-4). The map below displays the 36th District as it was defined on the 2001 map, prior to the recent redistricting. The map’s scale is 60,000:1. 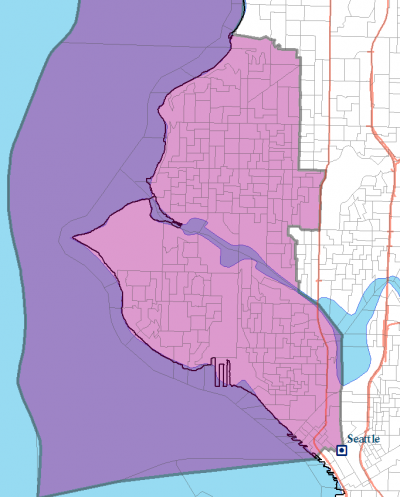 It is immediately obvious that the new version of the 36th LD is quite similar to the 2001 map. Given the homogeneity of Seattle, and understanding that the LD’s and the city’s population growth was much the same as the state as a whole, there was little reason to make many changes there. We can’t look into the collective mind of the Redistricting Commission, but it appears that they generally chose to concentrate whatever changes took place in Seattle in the redrawn 46th District.

The map of 2011’s 36th District displays the boundaries of the Congressional Districts in its vicinity. Only one of those dashed blue lines is particularly interesting … the small piece of border in the lower right corner of the image. It demonstrates that the edge of WA-07 comes close to the 36th, but doesn’t quite get there. That piece of the CD’s border (WA-09 is southeast of that line) actually separates the 43rd District from the 37th; the core of Seattle is divided among the three LDs. 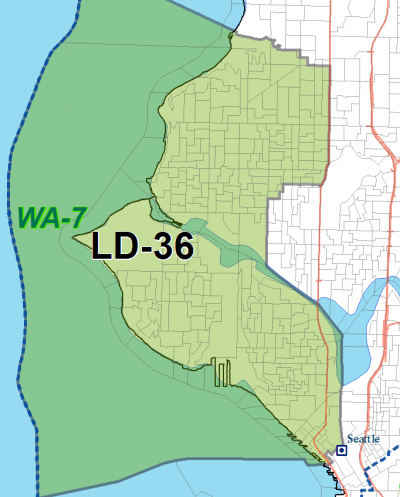 The great similarity between the 2001 and 2011 maps of the 36th Legislative District is quite evident when the two are superimposed on one another. Except for some very slight rejiggering in Belltown, the alterations consist of losing its portion of Fremont (to the 43rd) and gaining those parts of Greenwood and Phinney Ridge (from the 46th) that weren’t already in the District. The new 36th might possibly be a wee bit less Democratic than the old one — the western hillside of Fremont might be a tad bluer than the eastern hillside of Phinney Ridge — but there will be little change in the political nature of the LD. It remains a solidly Democratic bastion.

As a Fremont resident myself, I’m happy to see the new boundaries. Under the 2001 map, my precinct was smack-dab on the line between the 43rd and 36th, and at least one of the first-draft redistricting maps would have moved the border eastward, thereby transferring me into the 36th. Instead, the new 43rd covers 14 precincts that are home to quite a few former stalwarts of the 36th District Democrats, including a former LD chair and nearly half a dozen former Executive Board members of the old 36th. My precinct is now well inside the boundaries of the 43rd Legislative District, which extends around 10 blocks to my west. 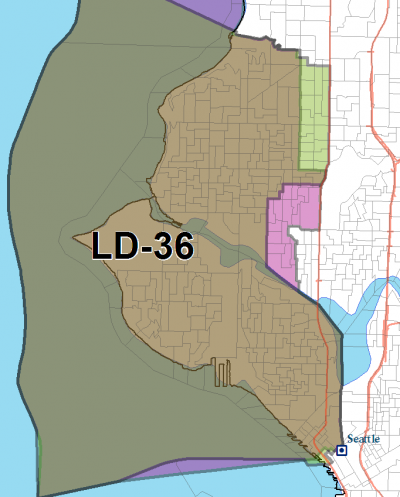 When Mary Lou Dickerson decided to relinquish her House seat, a crowd of aspirants arose immediately. Of the seven declared candidates, one is a self-declared Progressive, one is a Republican (Paulista, actually), and the other five are Democrats. Sounds pretty typical for this solid blue LD.

There is general agreement among the Democrats on the issues. So perhaps the crux of the matter will come down to the candidates’ personal backstories. In alphabetical order, the Democrats are:

In a very real sense, this election reminds me of the 2006 open-seat House race here in the 43rd. Back then, we had six excellent Democrats competing for the seat then held by Ed Murray, who was running for the State Senate. In that primary, Jamie Pederson won the Democratic nomination with just 23% of the vote. One difference between then and now is that in 2006 we were temporarily operating under the sensible Open Primary, Private Choice methodology (called Pick-a-Party by Sam Reed) rather than the ridiculous Top Two favored by the inane majority among us. Thus, winning the Democratic primary was tantamount to winning the general election. There was a Republican primary as well in 2006, wherein the winner drew far fewer votes than the sixth-place Democrat … but appeared on the November ballot.

There was no hint of negative campaigning in our 2006 primary in the 43rd. I’ve detected a hint of non-collegiality in the 36th, though there hasn’t been anything close to real mud-slinging. Perhaps the large number of candidates has prevented a repeat of the 36th’s ugly two-way 2008 race. Races actually, since the Top Two forced it to carry over from the primary to the general election. When there are lots of near-equivalent choices available, it wouldn’t be sensible to alienate any of the electorate. Assuming that two of the Democratic candidates will continue on to the November ballot, could the gloves come off post-primary? We’ll see…