Number two in the series is another Seattle-area LD with an open seat. Two of them, actually, thought one of these will assuredly be filled by the incumbent whose seat will be open in this election. Confused yet? We’re talking, of course, about the 11th District.

NOTE: click on the “Click to continue” link below to view a key that defines what the various colors and other symbols on the maps actually mean.

The 11th District is one of the most oddly-shaped LDs in the state, seeming to wrap around the southern shores of Lake Washington without ever actually reaching the lake itself. It’s an industrial and commercial district, thrusting into the port-oriented southwest portion of Seattle in addition to Tukwila, parts of Kent, and some of Renton. Under the 2001 Legislative District map, the bulk of its land area was in that Duwamish River portion of the 11th District. The LD reached almost to the center of Burien. Perhaps your imagination is better than mine, because I can’t think of a metaphor that describes the shape of 11th Legislative District. Its 2001 borders, at the scale of 1:80,000, are shown below: 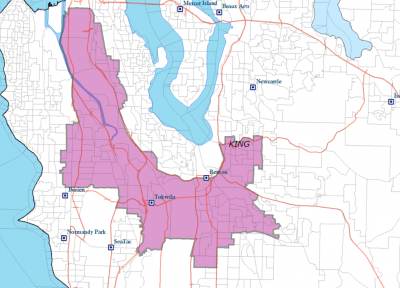 Viewed by itself, the new version of the 11th LD doesn’t seem all that different from the 2001 map. It remains misshapen, so much so that it (like the 2001 version) might remind you of this infamous image from a Massachusetts newspaper cartoon: 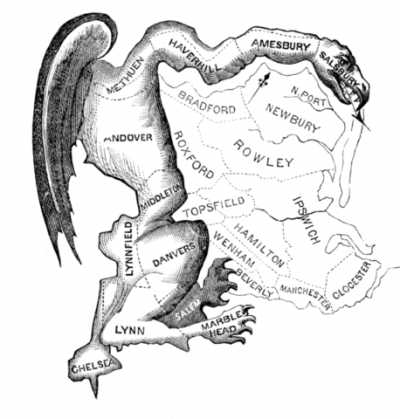 Looking at the new 11th LD more carefully, though, we observe that it no longer approaches Burien. Also, its border has been “notched” to exclude central Renton, and the 11th extends farther to the east than had the 2001 iteration of the district. 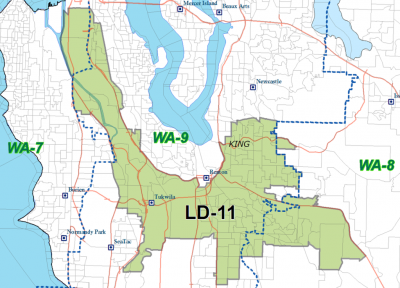 When the 2001 and 2011 versions of the 11th Legislative District are superimposed on one another, the locational shift is readily apparent. Some of the changes are fairly small (a precinct here, a precinct there). The loss of Highline and Burien is easy to see, as is the large swath of suburbia, perhaps even exurbia, that is now part of the LD. Industrial grit meets tract houses and strip malls. 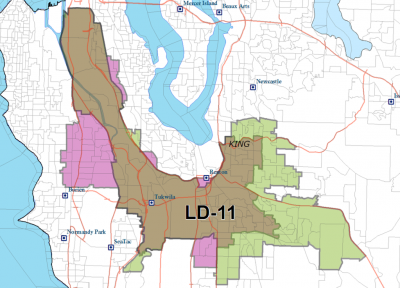 While it is correct to say that Senator Prentice is retiring, I wonder whether she would have stayed on if she hadn’t been redistricted out of the 11th LD. One might almost suspect that the Renton “notch” I mentioned earlier was created so as to remove her from the district. Unlike Representative Kagi of the 32nd LD (who moved back into her district), Senator Prentice chose to retire rather than try to win office in her new LD, the 37th. Then again, the Senate seat in the 37th isn’t up in this election cycle, so unless she wanted to run for the House she would have had to sit out for a couple of years anyway. Might she unretire and take on Adam Kline in 2014? I have my doubts, as she would be 73 by then.

There’s no doubt that Bob Hasegawa will win the 11th LD Senate seat in November. Even with the addition of a lot of less-than-urban territory, this remains a solidly Democratic district. Hasegawa is well known as a leader in labor and social justice issues, fitting very well with the nature of the 11th. I would have called him a perfect fit if the 11th had retained its previous borders, but this isn’t quite the same district as before. His opponent is a token Republican who didn’t even name the correct office on her C1 form (it says “State Representative”).

Zack Hudgins briefly flirted with a run for Secretary of State this cycle, but decided against it a couple of months ago. So he’s running for reelecion to the House 1 seat. He’s opposed by a Democrat who got into the race when it looked like an open seat. Jim Flynn appears to be a serious candidate — his campaign treasurer is Phil Lloyd, whose other clients include Jim McDermott — but I don’t think Hudgins has all that much to worry about.

The big action in the 11th is in the House 2 seat, currently occupied by Hasegawa. Four Democrats are vying for the position, as well as a lone (irrelevant) Republican. All of the Dems have raised decent money so far; the one with the most name recognition, Port Commissioner Rob Holland, has taken in the least. Far ahead of the others, at nearly $250,000(!), is Bobby Virk. As I write this, only one Legislature candidate in the entire state (a self-funding Democrat running for the open Senate seat in the 27th LD) has taken in more money than Virk, who is definitely not trying to buy himself a place in Olympia. His personal contribution to his campaign is negligible.

Clearly, although there are nominally two open seats in the 11th Legislative District, one of those is already spoken for. In the House 2 position, I can’t imagine that Bobby Virk will finish third or lower in the primary. He has, after all, taken in more than three times what his opponents have … combined. Who will join him on the general election ballot? I have no idea. Perhaps someone more familiar with the 11th Legislative District can edify HA readers.