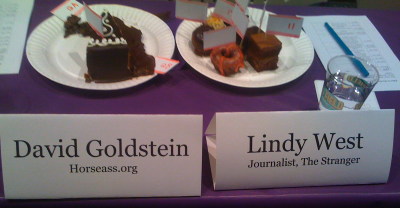 Future co-worker Lindy West and I sat next to each other at the judges table at last night’s Chocolate for Choice, and I couldn’t help but notice a disparity in our name tags. Lindy, by virtue of her tenure at The Stranger, is identified as a “journalist,” whereas me… well… they weren’t sure how to describe what I do (Blogger…? Writer…? Crackpot…?), so they just left it blank.

But soon, thanks to the magical, instant credibility of a newspaper masthead, I can only assume that I will be a real journalist too!

My mother will be so proud (though not as proud as if I were a real lawyer, but at her age, you learn to take what little joy from life that you can get.)