Successful leadership requires both vision and execution, and judging from the bold, light rail expansion proposal he announced Wednesday, mayoral wannabe Mike McGinn appears to be getting the first part down pat. As for the second part… well, that’s the question, isn’t it?

You can read the instant analysis from the transit geeks at Publicola, Seattle Transit Blog and elsewhere, though to be honest, there isn’t all that much in the way of detailed analysis because the announcement itself is pretty thin on details.  But that’s okay, because rather than etching a light rail plan in stone, McGinn appears to really just be saying, “hey… we’ve been studying these neighborhood extensions since 1920… now let’s get our shit together and build it!” Though, not exactly in those words.

McGinn’s proposal calls for developing a plan within his first two years as mayor to connect high density neighborhoods — Wallingford, Fremont, Ballard, Queen Anne, Belltown and West Seattle — to our existing regional light rail system using compatible technology. The plan and all taxes to fund it would be put before Seattle voters, and construction and operations would likely be handled by Sound Transit.

And as we all know from previous transit debates and controversies, there’s nothing new about the idea of these neighborhood extensions. Indeed, much of it has already been extensively studied by Sound Transit as part of its long range planning process. 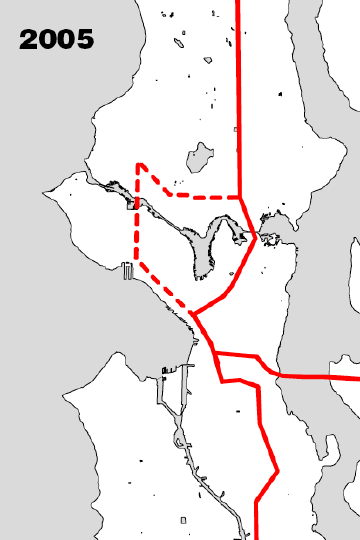 You’ll notice the West Seattle to Ballard route is not included in this 2005 map, because ST had basically backed off the Monorail’s bailiwick, but they’ve studied that route too. Somewhere in the archives you’ll find plenty of estimates, however preliminary, of both ridership and cost, along a number of possible routes. In fact, the only truly novel idea in McGinn’s proposal is the suggestion that we might actually build it, and sometime in the first half of this century.

Given the political will and the money, of course we can. And that’s where part two of the leadership equation comes in.

McGinn suggests that we “use existing city and/or Transportation Benefit District taxing authority” to finance the project (voters permitting, of course), but as Ben at STB points out, that doesn’t raise very much money. Or perhaps McGinn is thinking of the MVET authority previously granted the Monorail? Maybe, but the problem is, we don’t appear to have the authority to use that authority in the way that McGinn proposes, so Seattle would first have to receive permission from the legislature to tax itself to build the neighborhood extensions it wants. That’s a little political reality McGinn should keep in mind should he butt heads with Olympia over the deep bore tunnel he so feverishly opposes… a political reality complicated by the fact that the powers that be covet what little unused taxing capacity remains within Seattle as a means of funding highway improvements throughout the rest of the region. That’s largely why they opposed putting ST Phase II on the ballot.

Even then, it’s not clear that the MVET alone would provide enough revenue to build out the full neighborhood system in any sort of a  timely fashion — say, fifteen years versus fifty — especially if multiple costly water crossings are included. Annual revenues determine how much you can bond, and the amount you can bond determines how fast you can build… and that, after all, was the final nail in the Monorail’s coffin: a 30-percent shortfall between the revenues needed to properly bond the project and the revenues actually being collected. So how does McGinn get from here to there?

As Ben points out, one approach would be to build a lower cost system more along the lines of Portland’s MAX and ST’s Rainier Valley alignment, mostly at grade, with little in the way of fancy stations. Such a system would be cheaper and faster to build, much of it running along existing city right-of-way, but it would also be slower and provide less maximum capacity than the grade-separated route along much of the Central Link. Topography won’t allow this approach in some places, but one can certainly imagine an at-grade alignment down Elliot AVE and and 15th AVE W, for example.

But another comparison to Portland also needs to be made, in that, unlike the doomed Monorail, MAX’s various lines have been built with as much as 83% federal funding, along with a steady stream of dollars from the state, whereas the Seattle Monorail was budgeted to receive virtually zilch in state and federal money. You can pretty much rule out state funding from a legislature that has determined that fucking Seattle is always an effective election-year strategy, but it’s hard to imagine such an ambitious build-out being achieved without a substantial infusion of federal funds.

In reality, it’s hard to see McGinn realizing his vision without some combination of all of the above. He’s going to have to cajole the legislature into giving Seattle additional authority, convince Seattle voters to tax themselves while tamping down expectations in terms of the type of system and/or time of delivery, and effectively work the state’s congressional delegation into doing their all to squeeze a substantial contribution out of the federal budget. Meanwhile, he’ll have to do all that in the face of a Seattle Times editorial board hostile to both rail and taxation, and a city council that may actually attempt to finally reassert itself against a novice mayor. And all that’s assuming that Sound Transit is willing and able to take on the project. That makes for a lot of ifs.

And, oh yeah… he first has to defeat Joe Mallahan in November.

Is McGinn up to the leadership challenge? I dunno. That’s the conundrum voters are going to have figure out for themselves.