If Dino Rossi is going to continue to drop hints that he’s considering a run for the U.S. Senate, then it’s time he started answering questions about where he stands on the hot button issues of the day. Like, does he pledge, if elected, to join his fellow Republicans in pushing for repeal of the Patient Protection and Affordable Care Act?

Because if you don’t start addressing legitimate public policy issues, then questions about your character and shady business dealings are all voters will have to assess you as a candidate.

The Fed has finally came clean. It now admits it bailed out Bear Stearns – taking on tens of billions of dollars of the bank’s bad loans – in order to smooth Bear Stearns’ takeover by JPMorgan Chase. The secret Fed bailout came months before Congress authorized the government to spend up to $700 billion of taxpayer dollars bailing out the banks, even months before Lehman Brothers collapsed. The Fed also took on billions of dollars worth of AIG securities, also before the official government-sanctioned bailout.

As Reich points out, we have an un-elected, nearly unaccountable organization choosing winners and losers in our “capitalist” system. Keep in mind this happened in 2008, while George W. Bush was still president and Hank Paulson was Secretary of the Treasury. Ben Bernanke is still chairman of the Federal Reserve itself, and Tim Geithner, who was New York Fed chair when this “bailout” occurred, is now ensconced at Treasury. As always, Reich’s post is very much worth reading.

There were not any Tea People in late 2008, and it seems to be forgotten that the use of the Boston Tea Party as a symbol was first thrown out by CNBC hack Rick Santelli in a a possibly pre-planned and infamous rant in early 2009. Now that we know the Fed was operating as an unelected shadow government, the specter of Santelli yelling about not wanting to pay the mortgages of “losers” is even more insidious.

Divide and conquer is a very old concept, and that’s what is happening to this country. I can’t help but think that as the Tea People bitch and moan about a health care reform law that holds the promise of modest but very real improvements in things like pre-existing conditions bans and such, they are missing the actual economic tyranny that is so clear to anyone who chooses to look.

Republicans could have participated in the reform process, but instead they decided to lie endlessly and fan popular resentments that should be directed at their benefactors, namely the corporate barons of this country, and re-direct them using classic disinformation techniques like conspiracy theories, racism and anti-intellectualism.

At least with health care reform there will be democratic elections, and if a majority of citizens choose to punish Democrats for enacting the reform, they will do so. Not so with the Fed and the nation’s gigantic financial institutions, who are accountable to nobody but themselves. As long as moral hazard and the picking of winners and losers stands, talk from the Tea People about “free markets” and “smaller government” is nothing but a cruel and absurd joke. They accuse us of wanting socialism, an asinine claim when their puppet masters are running an organized criminal enterprise.

As it turns out, they are the mob. Just not in the way they thought. 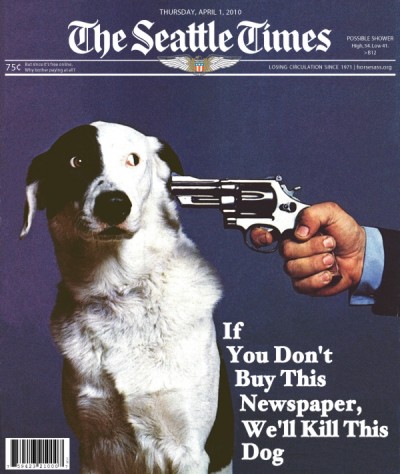 And don’t think for a moment that Seattle Times Publisher Frank Blethen wouldn’t do it.

With all of the focus on how terrible a newspaper the Seattle Times is, I temporarily forgot how terrible a newspaper the Tacoma News-Tribune is. To be fair, I’ve seen far more incoherent anti-drug editorials than the one in that link, but it ends up completely missing the larger point behind the corruption within the medical marijuana community. The recent violence against members of that community has intensified a few pre-existing rifts, but it also turns out to be a good example of why moderation within that group is as important as ever if we’re to overcome the outdated stereotypes about marijuana and close the curtain on a truly destructive social policy – and why creating a legal and regulated market remains the smartest solution to the problem.

That editorial is a good springboard for tackling various aspects of those topics, so I’ll take it piece by piece: