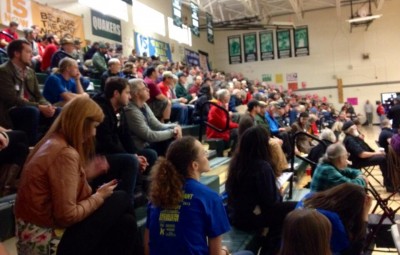 About 300 people showed up early for daylong $15 Now conference on a beautifully sunny Seattle morning.

I know a lot of establishment folks are rolling their eyes at the notion that 15Now.org is holding a national conference in Seattle today. Arrogantly overambitious, amiright?

But it turns out, that’s exactly what this is. Among the 300-plus attendees who have already arrived for the morning plenary session are vocal contingents from Boston, NYC, Philadelphia, Pittsburgh, Chicago, Minneapolis, LA, Oakland, and other cities scattered throughout the US. It really is a national conference.

And the focus  of the conference is national as well. Attendees today will approve the structure of a national organization, and elect executive committee members from throughout the country. Today’s conference is about much more than passing a $15 minimum wage here in Seattle. As 15Now.org co-founder Jess Spear told the crowd, “$15 isn’t the end—it’s the beginning.”

I’ve agreed to speak at tonight’s rally on the topic of the role of the media in the fight for a living wage. What will I say? I’m not exactly sure yet. But stop by the basketball auditorium at Franklin High School at 7:30 pm to find out.