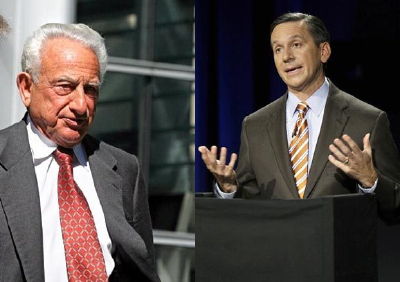 State Republicans talk tough about taking out U.S. Sen. Patty Murray in what’s shaping up to be a tough year for incumbents, but time’s running out to field a credible challenger, and those WSRP faithful holding their breath in anticipation of two-time gubernatorial loser Dino Rossi jumping into the breach are likely to have their faces turn blue long before Washington turns red.

While Rossi would no doubt like to be elected Senator, insiders say he’s not so keen on the idea of running. Nor is serving in the other Washington all that appealing.

The governorship is only as hard a job as you want to make it to be, and Olympia is but a short drive from Rossi’s Sammamish home. But the U.S. Senate is a full-time gig that requires tons of travel and the uprooting of one’s family, and that’s not exactly what Rossi signed up for when the WSRP’s second-choice (Dave Reichert was the inside favorite until he opened his mouth) accepted his party’s gubernatorial nomination back in 2004.

But perhaps the biggest reason why you won’t see Dino Rossi’s name on the “Prefers GOP Party” ballot anytime soon, is that the post-economic-collapse political climate and the financial scandals that precipitated it have virtually assured that Rossi’s own business dealings would be exposed to the kind of public scrutiny he managed to mostly avoid in 2004 and 2008. And it’s not so clear that Rossi’s reputation would hold up so well under such circumstances.

Of course there’s Rossi’s close business relationship with his longtime mentor Mel Heide, who pleaded guilty to bilking millions out of clients two years before Rossi finally severed their ties, not coincidentally in the middle of Rossi’s first political campaign. Heide’s shady real estate dealings have been reported at length, but Rossi’s own business practices while in Heide’s employ have never been fully investigated.

But of even greater concern to Rossi and his image makers might be a more recent scandal, his sweetheart deal and unreported $50,000 loan from real estate developer Michael Mastro. Back when the story was all but brushed off by the media in the final days of the 2008 gubernatorial campaign, Rossi’s spokesperson dismissed it as an “11-year-old oversight,” but since then Mastro’s own shady dealings infamously came to light after the state filed securities charges against him in the wake of a financial collapse that has cost hundreds of local investors all of the $100 million they entrusted in Mastro.

Kinda like the Puget Sound’s own personal Bernie Madoff.

So what did then state Sen. Rossi know, and when did he know it? Well, surely Rossi had the real estate chops to know that he and two BIAW lobbyists had received a helluva deal when Mastro sold them the Windsor Court Apartments in 1997, while lending them the money to buy it. Rossi and his buddies repaid the loan a couple years later, after flipping the property for a handsome profit.

Huh. Big profits from a no-money-down real estate investment; it sounds like one of those too-good-to-be-true, late night infomercials. And meanwhile, Mastro’s own investors are out their entire kitty.

Rossi profits from his sweetheart deal, while Mastro's investors suffer

No doubt Mastro thought he was making a prudent investment of his own, buying the loyalty and friendship of a rising state senator (he was also an early big contributor to both of Rossi’s gubernatorial campaigns), but I’m not so sure his hundreds of bilked investors would look so kindly at the deal. Neither am I sure that the media can look the other way should Rossi jump into a high-profile U.S. Senate race — not even the reliably pro-Rossi Seattle Times.

Back in 2008, when the story was merely about Rossi’s failure to report the Mastro loan, the Times pretty much dismissed it as an unintentional oversight, writing that “His campaign correctly pointed out that much larger real-estate transactions were disclosed on his personal financial-disclosure form.” But in light of what we now know about Mastro’s business practices, that excuse in itself should raise some eyebrows.

Why would Rossi report larger transactions, but fail to disclose this one? Was it really an oversight, or did Rossi have more to hide than the Times and others first suspected?

That is a question that likely won’t be adequately investigated unless he challenges Sen. Murray, which given the current political and economic environment, and his known close ties to two shady real estate investors, Rossi is exceedingly unlikely to do.