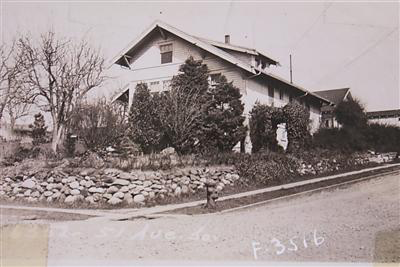 This is my single family detached home (circa 1935) which makes me part of the problem, not the solution.

I’ve recently been drawn into a Twitter feud with a self-proclaimed “urbanist” who insists that the only solution to Seattle’s affordable housing crisis is to free up developers to build whatever they want wherever they want. Really. I don’t want to mention him by name—because why drive attention to his extremist libertarian views?—so for the purposes of this post, I’ll just call him “Ben.”

When I asked Ben if it would be okay to build 30 stories on my 6,800 sq ft single family lot, he said, “Of course!” When I elaborated, “How about an office tower, or a Hooters … or a rendering plant?” he countered that a rendering plant wouldn’t pencil out with our land values, but “sure.”

And when I pressed on, “So you’d argue for no zoning and no Growth Management Act …?” Ben was unequivocal: “It is very likely that today we would get better enviro and affordability outcomes with no zoning, including no GMA,” Ben replied.

I largely share Ben’s vision of a taller, denser, more walkable, bikeable, and transit-rich Seattle, and to this end I support substantial up-zoning and other regulatory changes. But anybody who argues that the market alone can solve all our problems is simplifying Seattle’s housing crisis to the point of absurdity. In fact, I’d argue that we actually have three distinct housing crises, each requiring its own set of solutions: homelessness, workforce housing, and middle class housing.

Homelessness is at once the easiest and most difficult crisis to address. The most obvious solution is to just give these people homes—problem solved, and most likely at a price well below the real financial, human, and societal cost of allowing the problem to fester. Yet housing alone cannot address the mental illness, addiction, and domestic abuse that leads many people to the streets.

Even those who find themselves homeless due to mere misfortune are almost by definition destitute to the point of being outside the ability of a rational housing market to serve. Thus, one thing we should all be able to agree on is that homelessness is not a problem that can be solved by the market: there is simply no way to profit from building safe housing affordable enough for people who have reached such a level of desperation. How and how much we address homelessness is mostly a matter of how much taxpayers are willing to spend.

Likewise, our workforce housing crisis also cannot be solved by the market, as given the fixed costs of land and construction, there is no way for developers to make a sufficient profit building units within Seattle aimed at renters and buyers earning substantially below Area Median Income (AMI). In fact, the market is busy exacerbating our workforce housing affordability crisis by renovating or tearing down older buildings that have served lower-income Seattleites for decades.

Yeah sure, low-income Seattleites could always double and triple or even quadruple up with roommates in order to pay ever rising rents, and many already do. But as Hanna Brooks Olsen explained on Seattlish a couple years back, the math is truly awful. Add a child or two to the equation and awful becomes impossible.

Free-marketeers like Ben argue that eventually all this new upscale housing becomes affordable when, you know, it becomes old and rundown. Maybe. Or maybe Seattle’s ever-rising land values dictate an accelerated cycle of renovation and renewal? But even if true, eventually doesn’t help people living in the here and now. In the meanwhile, show me the private developer going to bankers with plans to build to 50 percent of AMI. Betcha you can’t.

It’s hard to see how any amount of deregulation can entice developers to build to this market without substantial public subsidies; and subsidies cost money. Whether that money comes from linkage fees or a property tax levy or a citywide income tax, it has to come from somewhere if we’re going to make an honest effort to address this crisis.

Of course, our growing middle class housing crisis is something that the market can chip away at (depending on your definition of middle class)—but that doesn’t mean we’re better off leaving it to the market alone.

We need to change our zoning to allow Seattle to grow taller and denser. We need to allow (even encourage!) accessory dwelling units throughout the city, relax costly car-centric requirements that new developments provide off-street parking, and yes, we need to substantially reduce the amount of land in Seattle that is restricted to detached single family housing. Seattle needs townhouses, row houses, triplexes, micro-housing, and many more two and three bedroom apartments suitable for families with children. And much of it needs to be built on land currently restricted toward low density use.

We don’t need to eliminate zoning the way Ben advocates, but we do need to zone smarter. And we all need to give up this fantasy that every middle class family can own a bungalow and a yard. Our population (demand) is growing while our land mass (supply) cannot. Barring an economic collapse (or a dramatic shift in housing tastes), single family detached housing will increasingly become a luxury that fewer and fewer Seattleites will be able to afford. Nothing can change that. Not the council, not socialism, and certainly not the market.

To be clear, I’m not anti-market or anti-developer. But this idea that the market, free from zoning and other regulations, will fix our entire housing crisis, is magical thinking. The market cannot touch homelessness. The market cannot come close to addressing our shortage of workforce housing. And while a unfettered market might well build a lot more housing than it’s building now, it will build it in a chaotic way that will surely piss off a lot of Seattleites—and because we are in competition with much higher priced cities like San Francisco, the market would still have a helluva time keeping up with demand.

The real decision facing Seattleites is whether we have the vision, the empathy, and the will to really address these problems? Are we willing to spend the money necessary to address homelessness by building more shelters and temporary housing, and by providing the costly wrap around services necessary to get the homeless off the street and back on their feet? Or are we comfortable enjoying the benefits of our economic boom even as homeless encampments sprout beneath our city’s freeways?

Are we willing to spend the money necessary to fund, build, and maintain the subsidized housing necessary to sustain a culturally diverse city—the culture that made neighborhoods like Capitol Hill so desirable in the first place? Are we willing to even consider a modest program of rent stabilization as a short term solution? Or do we want to become a culturally sterile city of haves by virtue of driving out the have-lesses and have-nots for want of affordable housing?

And do we want to broadly slow skyrocketing housing costs for the middle class, but only to the extent that the market delivers? Or are we willing to use the bonding capacity at our disposal to build thousands of publicly owned, non-subsidized middle class housing units a year that would grow more affordable over time by keeping them outside the rent seeking impulses of the for-profit market?

The Bens of this world insist that we only have one choice: To let the market do its magic, and live with the Seattle the market begets. But that’s not really a choice at all. It’s an excuse for failing to make the hard choices and sacrifices necessary to build a more humane, more diverse, and more affordable city for today’s Seattleites and for generations to come.