Strategic Vision has released a July poll that includes the Washington state gubernatorial contest. The poll shows Gov. Christine Gregoire (D) leading challenger Dino Rossi (GOP-Party) 47% to 45%, with 8% “undecided”. The poll of 800 people was taken from July 25th to July 27th, and has a margin of error of 3.5%

This is the fourth July poll in this race. Here are the results from the four polls:

Rossi last led in this race thirteen polls ago, back in late February. 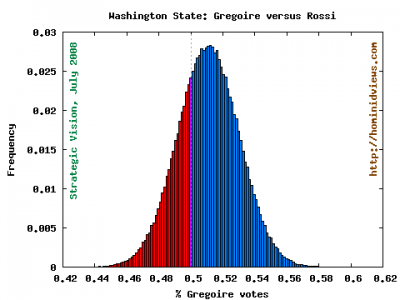 The second analysis combines the polls from all four polls in the Table, to give a July score for this race.

Here is a plot showing the distribution of votes in the million elections for the combined polls: 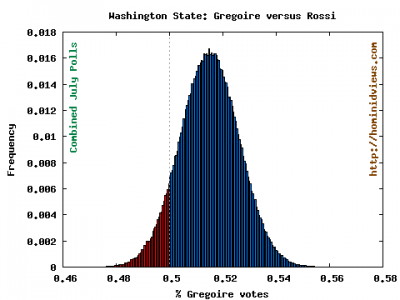 Strategic Vision also polled for the presidential election in Washington state. Sen. Barack Obama (D) leads Sen. John McCain (R) by a +11% margin, 48% to 37%. Obama’s lead is well outside the margin of error for this poll.