I’m buried this week, so this report will be brief. Let me first mention that I usually send out Tweets from @hominidviews with each poll I add to the database, and include a graph of the recent polling for the state. I also announce new analyses there, and sometimes offer quick previews when I don’t have time to do a full analysis. So follow me at @hominidviews for these updates.

Last week Donald Trump had made small gains over Sec. Hillary Clinton. Plenty of new polls have come—about 35—and many of these polls were conducted during at least part of Clinton’s “bad week.” Not surprisingly, Trump makes gains.

Clinton received (on average) 309 to Trump’s 229 electoral votes. This is substantially down from the 340 Clinton had last week, but still above the 270 threshold needed to win. 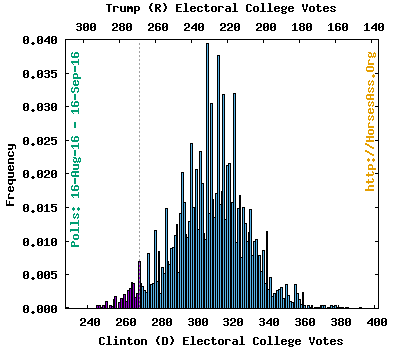