Tradesports is a UK-based online futures trading market (well… gambling site, really) where you can trade options on just about anything and everything from stocks to sporting events to political races. And look what race hit the most active list today: 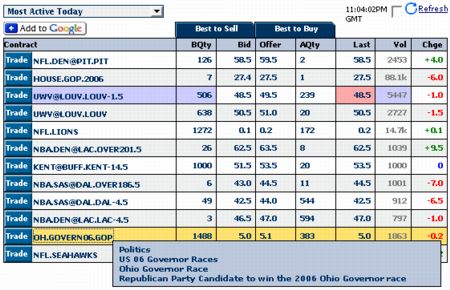 Hmm. Ohio’s corrupt Secretary of State Ken Blackwell is currently down 20 points in the polls in his race for the governor’s mansion.

I don’t want to sound paranoid or anything, but you gotta wonder why anybody would want to bet anything on Blackwell, even at 20 to 1 odds… unless, of course, you thought you knew something. Kinda like those savvy investors who shorted American Airlines on September 9, 2001.