A new Marist poll has been released in the race between Sen. Patty Murray (D-WA) and real estate wheeler-dealer Dino Rossi (R).

The poll of 638 likely voters (4.0% MOE) taken from 26-28 October has Murray leading Rossi 49% to 48%. Marist polls use live interviews and include a sub-sample of cell phone interviews. As we saw with the Marist poll from two weeks ago that had Murray up by +1%, the current poll is evidence against the otherwise strong trend of live-interview polls showing a modest (or better) lead for Murray.

I ran a Monte Carlo analysis that simulated a million elections using the observed preferences and sample size percentages observed in the new Marist poll. Murray won 567,112 elections and Rossi won 422,059 times. The poll (by itself) offers evidence that Murray would win with an election held over the past two weeks with a probability of 57.3%. Rossi would have a 42.7% probability of winning. Clearly, this result is a statistical tie, even if Murray’s odds are a bit better than Rossi’s. 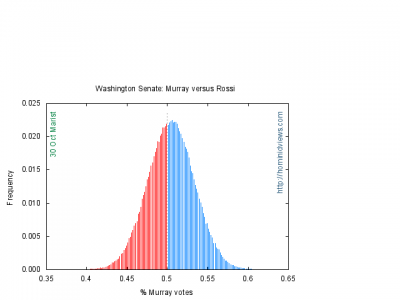 The Monte Carlo analysis gives Murray 789,523 wins to Rossi’s 207,597 times. Thus these seven polls provide evidence that Murray would win an election held over the past two weeks with a probability of 79.2%. Rossi would win with a 20.8% probability. 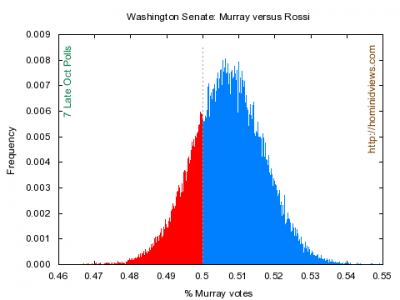 With only three days to go until the Big Poll is tallied, it is worth a few minutes examining the recent trend in this race. Here is the collection of polls in September and October (I’ve excluded polls released by a candidate or party): 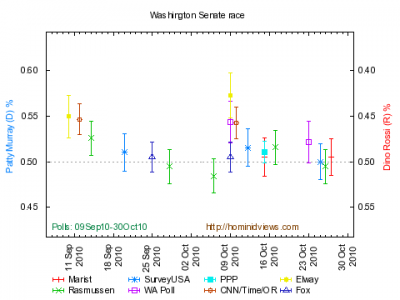 The bottom line is that Murray looks like she will win this one, but there are some uncertainties that may be distorting the map between polling and actual voting. My hunch is that the uncertainties don’t help Rossi’s chances much and some favor Murray: