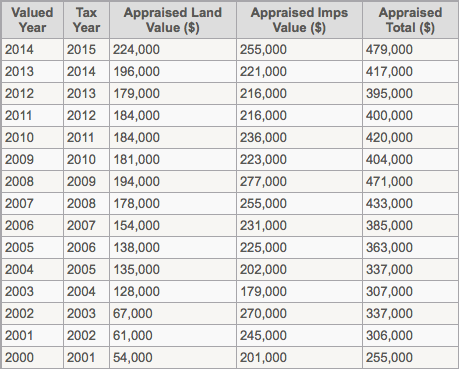 What with Seattle Mayor Ed Murray dramatically backtracking from HALA recommendations that would have allowed denser housing in many single-family zoned neighborhoods, I thought I should take a moment to elaborate on a point I made in my recent affordable housing post regarding the impossibility of making single-family detached housing affordable. “We all need to give up this fantasy that every middle class family can own a bungalow and a yard,” I insisted. And the table above helps explain why.

That’s the past 15 years of tax assessment records for my own bungalow and yard, copied and pasted from the King County Department of Assessments website. And assuming the total appraised value in the righthand column comes anywhere close to tracking the actual resale value, I’ve earned a surprisingly modest return on my “investment” over the past decade and a half: an average of only 4.29 percent a year, just twice the rate of inflation (Consumer Price Index) over the same period of time.

But that righthand column only tells half the story. The truth is, adjusted for inflation, the house itself has actually decreased in value over the past 15 years. Which makes sense. Depreciation. My house is old. It’s the value of my land that has figuratively gone through the roof.

According to King County, the land value of my 6,800 sq ft lot increased by almost 10 percent a year, from $54,000 in 2000 to $224,000 in 2014. That’s a fourfold increase—threefold even after adjusting for inflation. And unless our population growth projections are totally wrong, there’s no reason to expect Seattle land values not to continue to grow faster than the local economy as a whole.

Why? Because the supply of land in Seattle is finite. We can build more housing, but we can’t build more land. In fact, as the HALA recommendations acknowledged, to address our housing needs we really need to reduce the amount of land in Seattle restricted to 5,000-plus sq ft lot single-family detached houses. The mayor’s decision to reject these recommendations may or may not be good politics, but it’s certainly bad policy. Though either way, homeowners like me ultimately win.

If we do nothing to loosen density restrictions, then the value of my land continues to increase as demand for bungalows with yards increasingly outstrips supply. If we rezone my lot to accommodate greater density, then the value of my land probably increases even more, as it could then hold two or more $255,000 homes where it now holds just one. But either way, my land value goes up.

Of course, economics is a lot more complex than that. “Supply and demand” isn’t a law, per se; it’s more like economic shorthand. But while there are many factors that could alter demand, the supply of in-city land can never increase.

“Early growth skeptics would have found it hard to imagine the era of the $1 million bungalow,” Lesser Seattle booster Knute Berger recently bemoaned on Crosscut. But I don’t know why—it was inevitable. For you can build as many duplexes, triplexes, apartments, and condos as you want, and the iconic Seattle bungalow would still remain in short supply.

I dwell on this point to emphasize that when we talk about affordable housing, we’re not really talking about making houses more affordable—at least not those of the single-family detached variety. We’re mostly not even talking about affordable homeownership, what with renters bearing the brunt of the affordability crisis. And yet the pundits and policymakers driving this debate—as well as the reliably voting constituents most politicians tend to answer to—are disproportionately single-family detached homeowners like me.

Which I think tends to color the debate with a glaring lack of perspective.

Look, I love both my bungalow and my yard. And I’m very happy to have been born early enough to be able to afford it on less than a six-figure income. But unless she strikes it rich, I know full well that the only way my daughter is going to own a house like the one she grew up in is if I die in it. So if I really care about keeping Seattle affordable for my daughter’s generation then I know we’re going to have to radically change our expectations about what housing will look like for Seattle’s future middle class.

Seattle needs to grow denser and taller. And if we want to adequately address affordability, we need to grow denser and taller throughout the city. That doesn’t mean eliminating zoning. And it doesn’t mean eliminating single-family zoned neighborhoods entirely. But it does mean making smarter use of the limited land we have as we grow into a city that lacks the space to house the majority of residents in single-family detached homes. All options should be on the table.