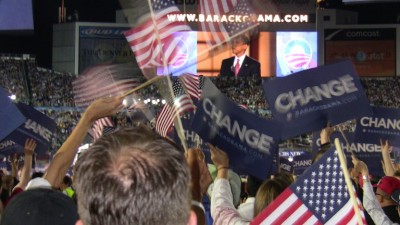 The view from the WA delegation at Invesco Field

I’m sitting in the Denver airport waiting for my flight back, and once again struggling to obtain a reliable Internet connection, so rather than compose a lengthy post, I thought I’d just pass on a few brief notes and observation.

The Invesco Field Experience
Throughout the week folks have been asking me what it’s like to attend the DNCC, and I’ve consistently replied that while it’s an amazing experience, I kinda feel like I’m missing the convention.  Accustomed to viewing these made for television events on an actual TV, I’ve felt a bit out of the loop, and totally out of touch with how the average American experienced the convention… and that after all is the experience that really counts. Attending a convention is like a attending a football game:  it’s exciting, sure, but you don’t see the game nearly as well as you do at home on TV.

Well, the football analogy kinda holds up for the unprecedented event last night at Invesco Field, where 80,000 screaming fans packed in to watch Barack Obama give his acceptance speech.  It was like attending a Super Bowl or World Series game, only instead of a game it was about something that truly matters.  There was an open area between the WA and MA delegations, behind a camera platform, which was quickly transformed into a dance floor where singing and swaying gave way to tearful hugs and back again all night long, as joyful delegates celebrated history in the making.

John McCain could spontaneously burst into flames during his acceptance speech, and I doubt it would make for a more memorable political moment.

The Long and Winding Road
There was a certain irrefutable logic to moving Thursday night’s events to Invesco Field a setting that could visually and aurally convey the unprecedented grassroots support Obama has garnered… but logical as it may have been, the DNC clearly fell down on the logistics of moving 80,000 people in and out of a highly secured location.

On Thursday morning I received an email instructing me to pick up a media shuttle at 7th and Auroria, a several block walk through the midday Denver sun from the Pepsi Center, and about a mile from the “Big Tent” where we bloggers were hanging out, but when I got there, all I found was an amorphous snaking line about three miles long, and a handful of uninformed and unhelpful police officers.  No signs, no guides, no volunteers… nothing.  Just tens of thousands of people—delegates, press and guests alike—attempting to make their way into the stadium and a brief moment of American history.

A TV cameraman told that the shuttle buses were back near the entrance to the Pepsi Center, and sure enough, a 10 minute wait in line, a ten minute bus ride, and 10 minutes through security, and I was on the field.  Meanwhile, Darryl, Andrew and Garlin, who lacked the requisite press credentials slogged two and a half hours in the late afternoon heat before finally passing through security.

Egress was hardly any  better, as thousands of delegates and guests where channeled into narrow passages toward a chaotic parking lot where we were left to own own devices to find a shuttle bus to our final destination.  Oregon legislative candidate Jefferson Smith finally took charge of the Shuttle 7 contigent, his Oregon Bus Project experience paying off for the weary masses.  Democracy in action.

Annie Wagner is a Coward
When FOX News lying blowhard Sean Hannity showed up on the field, I shot a couple pictures, but none of them did him justice.  So I asked Annie Wagner (Defense Daily) to stand behind him and give him bunny ears as I snapped another shot.  She demurely declined, saying “I’m afraid of Hannity.”

Well, Annie may be a coward, but at least she’s a good tipper: 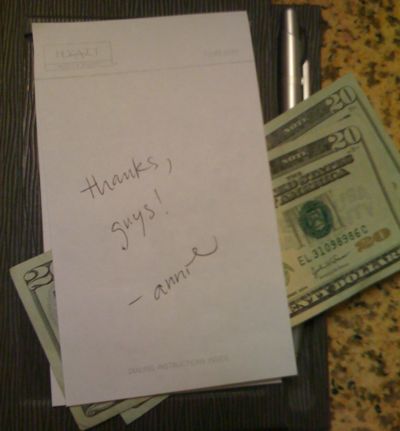 No, thank you, Annie.  And enjoy law school.

Jenny Durkan is No Coward
Throughout the convention the hotel where we stayed housed the delegations from Washington, Oregon, Arizona and FOX News.  Well, last night after the convention State Dem committee woman Jenny Durkan managed to corner Karl Rove in a hall and tell him “You’re not welcome here!”  Rove protested, asking if she ran the hotel, excusing his presence (and its unmistakable stink of evil) by pointing out that he was a paying guest, to which Durkan responded, “Well whatever they’re charging you, it isn’t enough to pay for the damage you’ve done to America.”

You gotta love Jenny.  (And love the fact that she’s on our side.)

Time to board the plane… more tidbits later.