Gov. Scott Walker (R-WI) started out the election season with much buzz. But at this point, pollsters seem less interested in him, so there isn’t a lot of really current polling that pits him against a Democrat. There are only 83 state polls matching up Walker to Hillary Clinton (Jeb Bush has 212 such polls). Consequently, Walker at a bit of a disadvantage, since most of the polls were taken when Clinton was polling more strongly against all opponents.

No biggie…this is a shakedown for these analyses, so I’ll post it with the caveat that there just isn’t enough recent polling for this match-up. Perhaps pollsters will soon find reason to be more interested in the Governor.

Clinton tends to win in the classic swing states of Florida, Ohio, Virginia, Pennsylvania, Michigan as well as Nevada and New Mexico. But the most remarkable thing about these results is how poorly Walker does in his home state of Wisconsin. Here’s the polling picture: 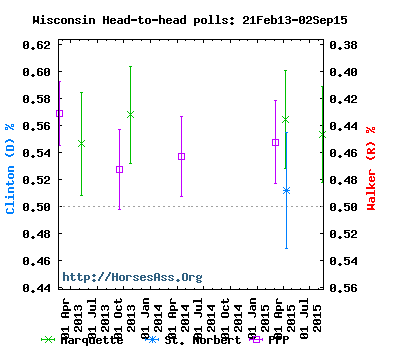 Walker is down by double digits, suggesting the people of Wisconsin are not really interested in seeing him in the White House (and maybe not as their Governor). This is quite damning for Walker, who is campaigning on the fact that he is a thrice-elected Republican in a blue state. 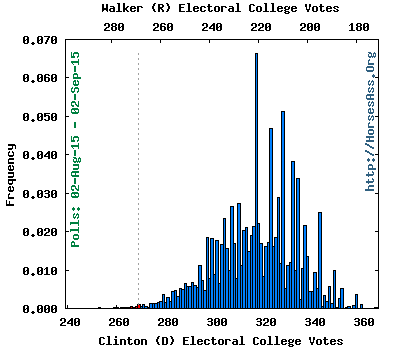 The long term trends in this race can be seen from a series of elections simulated every seven days using polls from 02 Sep 2014 to 02 Sep 2015, and including polls from the preceding month (FAQ). 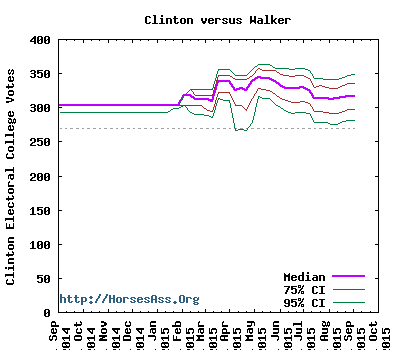 This table summarizes the results for the past month by state. Click on the poll count to see the individual polls included for the state.