There is another statewide poll result released by King 5 today. This one is for the 2012 Attorney General race between King Council members Bob Ferguson (D) and Reagan Dunn (R). Like the gubernatorial poll I wrote about earlier, 523 registered voters expressed a preference. 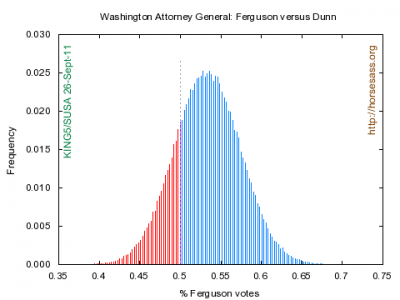 If an election was to be held today, we would expect Ferguson to win with an 83.3% probability. Of course, the polling results are not “significant” by traditional criteria.

I suspect that this poll is biased in favor of Ferguson. My reason is that the largest share of undecideds probably come from outside of King County, where there is low name recognition for both candidates. Therefore, what we see is likely dominated by Democratic-leaning preferences within King County. A small countervailing bias might arise from the better name recognition outside of King County for Reagan Dunn, on account of his late Mother, Rep. Jennifer Dunn (R). Still, Ferguson gets a few points advantage out of the poll at this stage of the election season.

The contrast between this race and the gubernatorial race is interesting. At first glance, it might seem concerning that Ferguson (D) leads Dunn (R) for Attorney General in the same poll that finds current Attorney General Rob McKenna (R) leading Rep. Jay Inslee (D) for the Governor’s race. Rather than spelling doom for Inslee, I think this just shows that McKenna has much better name recognition statewide, and even within King County. The position of Attorney General can be high-profile, and McKenna has certainly not been bashful about taking advantage of it to raise his profile. And while Inslee has been very popular in the 1st CD (winning by double digits in every one of his last six reelection bids), he hasn’t nearly the name recognition outside of his district.